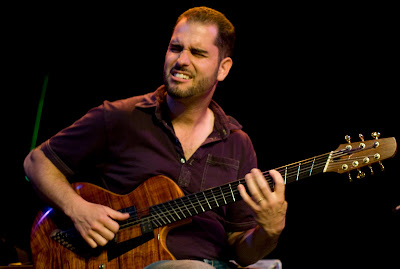 Earlier this year, Charlie released his latest album on Ground Up, the first time his album has been released by a major label in 9 years after a number of self-releases. The amazingly titled Everybody Has A Plan Until They Get Punched In The Mouth (10 points for anyone who can name the person who first uttered those words) features a quartet line up including Bobby Previte on drums, Curtis Fowlkes on trombone and Kirk Knuffke on cornet.

The arrangements lock in, offering many twists and turns, but never leave the groove behind….All killer, no filler. – All Music Guide

Hunter willl appear in the UK in November to perform material from this latest album and he is joined by Bobby Previte plus two special guests - Kieran McLeod on trombone and Yelfris Valdes on trumpet.

Audiences in the North will have a chance to see the band when they perform at Band on the Wall on November 20th. The band will also perform at Ronnie Scott's (November 18 + 19), Birmingham (November 21st) Bristol (November 22nd) and Edinburgh (November 23rd).

For more information on the Manchester date, visit the Band on the Wall website. For information on Charlie Hunter, visit his website.
Posted by Editor at 09:42