New from Discus - See One, Do One, Teach One 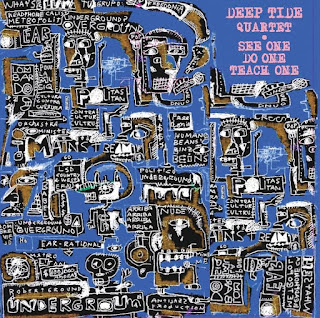 Martin Archer's label Discus Music released their 64th album on August 1st as the third in a series of quartet releases featuring new combinations of musicians from the Discus family.

Open ended jazz playing with no stylistic limits – written scores, graphic scores, improvisation – improvisation which is inclusive of melody and structure – whatever we feel like playing – plenty of space for the music to develop its direction – concentrated and careful listening - ultimately rooted in, and building on the tradition of, pure jazz skill no matter where the music takes us.

Though originally conceived as a recording project, the band quickly decided to work together and take the band out live. Their debut was at The Verdict in Brighton in July and dates are confirmed in Liverpool, Birmingham, Sheffield and Bristol in the coming months.

For more information and to listen to/buy the album, visit the Discus Music website.