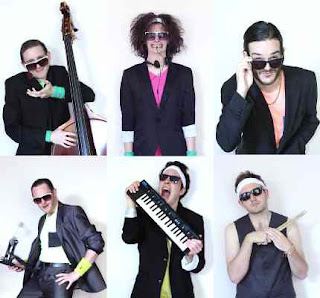 News from Dave Hatfield, Fusebox - "Apologies for the monster e-mail but there's a lot to tell you. If you want latest details of the Fusebox programme that's at the beginning but read on for news of Fusebox on the Radio, Roller Trio's award nominations, Marsden Jazz Festival, Vibrations reviews, Howard Assembly Room concerts and Peter Whittingham Award 2012:"

James Mainwaring takes time out from a slightly manic Roller Trio schedule to put in an appearance with the Space F!ght collective of musicians, sound and visual artists. The performance features the interaction between improvised and composed music and communication between acoustic (saxophone)and electronic (electric guitar,
drummachine, groove box). Musicians will be processed live with analogue and digital effects thatemphasize their idiosyncrasies. Visuals will probably be limited to one projector at the Fox & Newt but for the full effect check out this recent performance utilising4 screens, 28 speakers and 4 subwoofers at Ron Cooke Hub at the
University of York. http://vimeo.com/41247196 www.spcfght.bandcamp.com

Blurring boundaries between the austere world of free jazz and commercial pop, 'The Smiths project' challenges accepted norms of style and genre. Using the music of the eighties iconic pop band The Smiths as a point of departure, the music created draws on a variety of styles and improvisational techniques. An eclectic mix which should serve to deconstruct as well as shed new light on the music of The Smiths. Whether you're a Morrisey/Marr fan or simply intrigued at the prospect, be early and don't miss a note.

A great pleasure to present this international double bill featuring musicians from the UK alongside their contemporaries from Norway, Denmark and beyond. Particularly good to welcome Alan Wilkinson back toLeeds with all his connections with the Leeds music scene and the legendary Termite Club.

An Invitation in 2010 took British saxophonist Alan Wilkinson across the North Sea to tour with 3 of Norway’s brightest young free players, guitarist Kim Johannesen, bassist Ola Høyer, and drummer Dag ErikKnedal Andersen.  From the outset the music smouldered with ideas and latent potential before coaxing itself into nerve-jangling intensity. This gig is part of the group’s fourth tour together  with gigs inScandinavia, Britain, Holland and France and coincides with the release of their debut CD, Sa(n)dnes(s),  on the French Gaffer records label.

Trio Riot relate their sense of energy to the 1980s British punk scene,their approach to sound is inspired by Ornette Coleman and other free jazz pioneers and in their compositional style the group draws inspiration from 20th century contemporary music. The energy and intensity of their improvising is focused towards the audience and aims for spontaneity in every moment.
www.soundcloud.com/trioriot                 www.youtu.be/FXBww265Wm8         www.efpirecords.com

Expect festive mayhem with the Fusebox Orchestra featuring specially invited musicians as well as yourselves, the audience, under the conduction of Dave Kane.
Support bands to be confirmed. Watch this space for further news of Christmas chaos, audience participation and maybe even free cake!

Doors open for all concerts at 8.00. Admission £8/£6 Fox and Newt, 9 Burley Street, Leeds LS3 1LD (opposite Park Lane College ) Tel: 0113 245 4527 Built above it’s very own brewhouse the Fox and Newt has a a great drinks selection and a choice of 8 hand-pumped beers including those brewed on the premises www.burleystreetbrewhouse.co.uk

Those of you who were at the Fox and Newt on Thursday 6 September will be aware that, not only was it a very special session musically, but that all the proceedings were recorded for future broadcast of Jazz on 3. Your first opportunity to hear the results comes in a specialprogramme to be broadcast on Jazz on 3 on Monday 8 October at 11.00 pm featuring Home of the Brave, Shatners Bassoon and Chris Sharkey. It will also be available on the BBC iplayer for the week following.

Many congratulations to James Mainwaring, Luke Wynter and LukeReddin-Williams who, not content just with being nominated forthe Mercury Music Prize, have also been nominated in the Best Jazz Act category of the MOBO awards. You can vote for them in the MOBO awards. Details on the website: http://www.rollertrio.com/# Next opportunity tosee Roller Trio live in Leeds will be at  at Brudenell Social Club on 12 December.

As always, the usual eclectic mix of events at the Howard Assembly Room Check out the full programme here: http://www.operanorth.co.uk/howard-assembly-room
We particularly recommend:

Marsden Festival time again with a strong recommendation for the New Stream series of concerts at the Royal British Legion Club on Saturday 12th. If the programme has a familiar ring maybe that's because  because 4 of the 5 featured acts have all appeared at Fusebox recently...Roller Trio, Chris Sharkey, Tom Challenger's Ma, Collider. All the more reason to get over there and see them over again alongside Shabaka Hutchings' Sons of Kemet which we'd love to see play at Fusebox some time.

Thanks to those nice people at Vibrations magazine for both the review of our July gig and of the Roller Trio Mercury nominated CD in the October issue. Try and pick up a copy  of this free guide to the Leeds music scene available in venues. Thanks particularly for these kind words:

"First off, let me just say what a lovely little upstairs venue the Foxand Newt have got there - intimate, secluded - and that Fusebox know how to throw a gig"

This one's is specifically for the musicians out there...get your applications in now!

The Musicians Benevolent Fund has launched its 2012 Peter Whittingham Jazz Award. Talented solo jazz musicians and ensembles are invited to apply. Over the past twenty years, the award has established itself as one of the most prestigious in UK jazz with a roll call of leading jazz musicians to its name. Previous recipients include Scott Stroman, Errollyn Wallen, Dave O’Higgins, Soweto Kinch, Gwilym Simcock, Empirical, and 2009 Mercury Prize nominees Led Bib.We are delighted
that 2011 Peter Whittingham Award winners Roller Trio have recently been nominated both for the Barclaycard Mercury Prize and for best jazz act at the 2012 MOBO awards. The award is open to musicians who are studying full-time on a jazz course in the UK or within the first two years of starting their professional career. The award of £4,000 is to help fund a specific project which will enhance the musical and professional development of the artist or group. The recipient will also benefit from career guidance from the Musicians’ Union. The closing date for applications is Monday 5 November and auditions will take place at The Premises Studios, Hackney Road, London on Tuesday 4 December before a leading panel of jazz experts. Full details can be found on the Musicians Benevolent Fund website helpmusicians.org.uk

PHEW, THAT'S IT FOR NOW...SEE YOU AT FUSEBOX