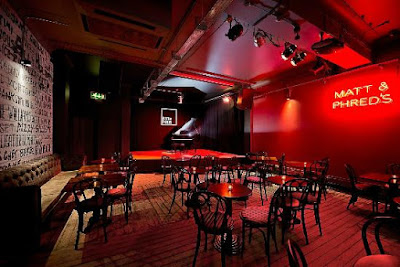 The North West has a number of venues and festivals programming live jazz year round and with only four days left of our advent calendar, we take a look at some of them...

Situated in Manchester's Northern Quarter, Matt & Phreds programmes live music every day of the week. There's quite a mixture in the bands they programme but you can expect to see Manchester's favourite Stuart McCallum, New York Brass Band and regular jam sessions. Plus you can get a pizza named after drummer Dave Walsh, so who can say fairer than that?

The RNCM has a year round programme of live music events, often programming international and touring jazz musicians. Their own RNCM Big Band often appears with special guests and in January trumpeter Ryan Quigley will join them. Early 2016 will also bring Clark Tracey to work with the band.

As well as the annual Jazz Festival, there is also year round jazz going on in Ribble Valley. Most of the gigs take place in the Atrium Cafe Bar and happen one Friday a month. Coming up after the Christmas break will be Graeme Wilson Quartet, JJ Wheeler and Tim Garland.

Southport Melodic Jazz programmes jazz gigs on Sunday evenings and is programmed by Geoff Matthews. Early next year brings a focus on emerging talent with Artephis and the Jam Experiment. And of course, their festival is in February!

The Cinnamon Club programmes jazz, soul and Motown at their venue in Altrinham. Their schedule has some local musicians like Sam Healey as well as touring and international acts like Liane Carroll and Barb Jungr.

Wigan Jazz Club hosts gigs on Sunday afternoons, usually on the last Sunday of the month. They are big fans of big bands so expect a few of those popping up on the programme. There's a big band bash on the 28th December and Al Wood's quintet plays tribute to Mulligan and Carter in March.