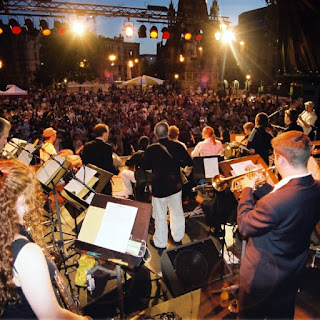 Here's part two of our look at summer jazz festivals in the North...

J-Night, the organisation behind jazz in Hull, programmes a summer jazz festival at the end of July each year. It takes place at the Hull Truck Theatre and the programme is mixture of established UK acts and emerging artists. The line up for the festival in 2016 has already been announced with YolanDa Brown's reggae love songs, Helen Watson, Jean Toussaint and Northern Line's Manjula.

2016 marks the 21st year of Manchester's Jazz Festival. MJF is one of the biggest in the country and pulls in thousands of people annually to the North. There's a huge programme with a mixture of local, national and international artists at venues across the North. There is a commission fund each year, lots of support for emerging artists and a specially brewed beer!

The Chapel Allerton Arts Festival takes place each year and is a local festival which contains arts, theatre and community projects. At the end of each festival, Steve Crocker and his team at Seven Jazz programme a full day festival of live jazz. There's a focus on Northern artists and audiences can attend for the whole day for £3 - what a bargain!

Lancaster Jazz Festival is growing year on year and is run by LCoM graduate Matt Robinson. This festival is populated by emerging artists playing original music. They programme at venues across in Lancaster and almost every gig is sold out at each festival!

This highly popular festival just sneaks into the summer list in late September. Tickets are already on sale for the 2016 edition and ticket holders will be treated to performances by Nathaniel Facey, Trish Clowes and The Abstract Big Band.