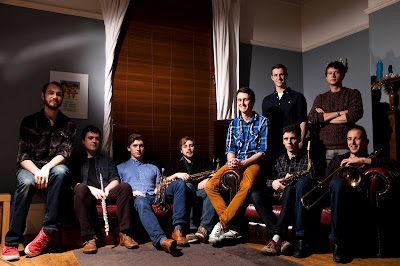 Here's a gig for those of you who enjoy large ensembles! Tom Maddison is a recent graduate of LCoM and since leaving, he's been busy gigging as a double bass player in a number of groups including the Big Easy and Portmanteau. For this group he's not only the bassist and band leader but the composer, too. His writing has been described as being akin to Brian Blade's Fellowship and the band have been working hard toward this gig so it's sure to be a good one. This ensemble is another prime example of the talent being produced by LCoM each year (incidentally, LCoM is 50 this year so we should perhaps expect some celebrations later in the year...)