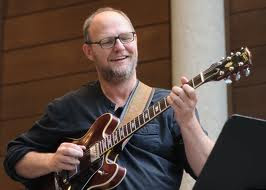 A couple of months ago, we reported on guitarist Mike Walker's new project-in-the-making, Ropes. It's an ambitious project featuring a 22-piece string orchestra and Mike is currently working to raise the funds necessary to record a band of that size!

On July 10th, there will be a special fundraiser gig at Zeffirellis in Ambleside. The gig will feature Mike alongside pianist Les Chisnall and saxophonist Iain Dixon, both of whom feature on Mike's new project.

At the gig, audience members will be able to preorder the new album for £10. We've heard that there are only 80 places available for the audience so we suggest getting in there quickly as we suspect it will be a sell-out!