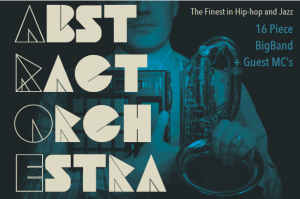 Saturday 1st March
The Wardrobe, Leeds
Doors 9pm, Colman Brothers 10pm, Abstract Orchestra 11pm. DJs before, during and after til 2am
Tickets £7 in advance (more on door) from www.seetickets.com – www.lunatickets.co.uk – www.crashrecords.co.uk – www.jumborecords.co.uk (0113 245 5570)

Following on from Riot Jazz Brass Band's appearance, DJ Lubi is hosting another Soul Rebels night on March 1st, this time featuring The Abstract Orchestra and the Colman Brothers.

THE ABSTRACT ORCHESTRA…..live hiphop with a big band punch!
The Abstract Orchestra is a 16 piece ensemble led by Haggis Horns saxophonist Rob Mitchell keeping alive the culture of musicians playing live hiphop, which goes back to the first Sugarhill Records rap hits of the early 1980s and comes right up to the present day via The Roots. Also inspired by the 40 piece orchestral arrangements by Miguel-Atwood Ferguson of the work of J Dilla, the band strives to merge great musical arrangements with incredible hiphop from across the decades to create an amazing live experience that truly is jaw dropping. Watch a clip of the band performing at the Wardrobe in October 2013.

The Colman Brothers are Mat (trombone) and Andrew (trumpet/flugelhorn) and on occasion Colman sister Sara on vocals. The Bristol boys make very nice original jazz music with soul and latin beats, perfect for listening, lounging or dancing to.
The brothers have been working together for over 10 years writing music for film, TV and other projects. Both are busy musicians who have performed/recorded with jazz, pop, funk and soul musicians across Europe. Mat has been an important part of hiphop/soundtrack beatmasters The Herbaliser’s live band while Andrew also performs and tours with his own quartet.
Since 2006 the Colman Brothers have been releasing killer dancefloor latin-jazz tracks on beautiful 7″ vinyl for DJ Dom Servini’s chic Wah Wah 45s record label and in 2011, the massively anticipated and critically acclaimed debut album dropped, followed in 2013 by the remixed version. First gig in Leeds so get down early to catch this quality soul/latin jazz combo live.
Check the Colman brothers here : http://www.colmanbrothers.co.uk/