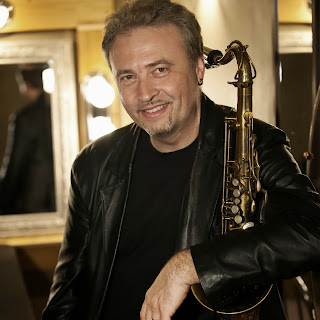 Only days after losing young saxophone star Marius Neset to the German label ACT, Edition Records has announced that British heavyweight Tim Garland will be joining the label for a double release with his long-standing Lighthouse Project in May 2014. The project began as a trio in 2003 upon Tim's move to the North East of England, but this new release showcases an expanded group that's a veritable who's who of contemporary jazz musicians, including John Patitucci, Jason Rebello and Ant Law.
Below is the press release from Edition:Below is the press release from Edition:


'Celebrating 10 years of his acclaimed and revered Lighthouse Project, this major double album release from Garland sees him further develop his highly original voice with a marriage of diverse influences and unique and varied line-ups.
Bringing together two projects that both compliment and form a distinct relationship with each other, the first disc includes ‘Songs to the North Sky’, (shortlisted for this year’s British Composer Awards) with the Royal Northern Sinfonia, bassist John Patitucci and percussionist Asaf Sirkis. The second disc, a celebratory expansion of his Lighthouse Project, features pianists Geoffrey Keezer, Jason Rebello and John Turville, percussionist Asaf Sirkis and guitarists Ant Law and Don Paterson (who harks right back to Tim’s Lammas days from the early 1990’s).
This major album sees a consolidation of the artistic work marked by his move in 2003 to the North East, within a mile of one of the UK’s most famous Lighthouses, in which some of his most adventurous music was first created. Now based back in London, this album marks a very personal journey covering a period of intense study in composition and orchestration as well as the honing of his own playing, matured by years of touring with Chick Corea.
‘Songs to the North Sky’ is a breath-taking, at times cinematic, set of tunes and variations where a 30 piece string orchestra is far from being padding. The music on the Lighthouse ensemble disc is probably his most vibrant ever, at times a romp with friends going back over two decades.
The result is a landmark album that marks Garland’s ongoing flowering as a saxophone player and composer, taking key elements of instrumentation and interaction from the previous 3 releases of Lighthouse material.
It is a huge privilege for Edition to be able to work with this unique musician on such a vital release in undoubtedly one of the most creative periods of his career so far. This is the next chapter for Tim Garland and for Lighthouse. With a new home at Edition as well as his continued involvement as Chick Corea’s regular saxophonist and now writing collaborator, this is an exciting new phase in his musical career that will take him to new heights and obtain a status in the international scene that only a few British musicians have achieved.'
EDITION