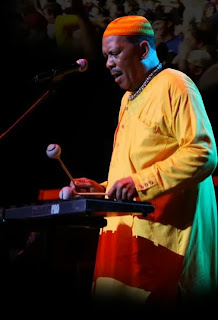 Legendary jazz vibes player and singer Roy Ayers, now heralded as 'the king of neo-soul', will be bring ing The Roy Ayers Ubiquity to the UK this winter.

Hitting the scene in the early 1960s Ayers was soon an award winning musician and collaborated with likes of Chico Hamilton, Teddy Edwards, Jack Wilson, Phineas Newborn and Gerald Wilson whilst still in the early stages of his career. Like many jazz musicians, Ayers changed direction in the 1970s and began working on a more R&B influenced sound, becoming a pivotal figure in the development of jazz/funk during his tenure at Polydor Records.  In 1979 he scored a top 10 hit with his single 'Don't Stop The Feeling' and in 1980 he collaborated with Nigerian afrobeat legend Fela Kuti.
In recent years his music has drawn heavily from hip-hop, funk and soul music and he has been heavily sampled by contemporary hip-hop artists.


The Roy Ayers Ubiquity will be playing the following UK dates: