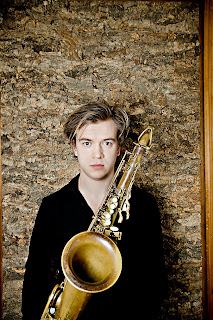 After two hugely successful years, Norwegian saxophone star Marius Neset has decided to leave Welsh label Edition Records and move to the German ACT. Marius released his first two albums as a leader with Edition Records, Golden Xplosion and Birds, to widespread critical acclaim in the UK and throughout Europe and has become a major name at many jazz festivals, his ferocious technique and and control making him a powerful force on the saxophone and earning him several comparisons to Michael Brecker and Jan Garbarek. Both albums also demonstrated Neset's vast talents as a composer, daringly rhythmic passages and fragmented melodies contrasting beautifully with delicate ballad writing.
Here is the statement from Neset and Edition Records:


PRESS RELEASE: Marius Neset to join the ACT label
In July 2010, we witnessed a concert by an unknown Norwegian saxophonist performing his final recital at the Rhythmic Conservatoire in Copenhagen. Every aspect of it was spellbinding and we knew immediately that we wanted to work with him and share our exciting new discovery with the world. In just over 3 years and 2 albums later, Marius Neset has become one of the most exciting and compelling jazz musicians to emerge in recent years.
It is, however, very disappointing for us to announce that Marius Neset will be leaving to join the ACT label. We have valued and will continue to value his friendship well into the future and we proudly reflect on working with such talent. Marius has been at the forefront of Edition since he joined, appearing on 4 albums; 2 as a bandleader, in duo with Daniel Herskedal and also with label boss Dave Stapleton.
As Marius explains: ‘I’m extremely happy to have made my first records with Edition Records. Edition has had a very important role in helping me to get where I am today in my musical life, much because they believed in me and my music from the beginning and took the chance to release Golden Xplosion. I am very thankful for what they did for my albums Golden Xplosion and Birds. Edition is one of those fantastic labels that are willing to give talented musicians a chance to get a great music carrier, and that has meant everything to me.’
All of us at Edition would like to wish Marius the best of luck with his future career and feel honoured to be have been a part of what we are sure will be an exciting journey.
EDITION RECORDS
This exciting journey will bring Neset to the UK in the new year, both in duet with tuba player Daniel Herskedal and with his working quartet featuring Ivo Neame, Anton Eger and Jasper Hoiby, the latter often replaced by the equally talented Petter Eldh.


These dates can be found here: http://mariusneset.com/gigs/
Posted by Unknown at 03:25