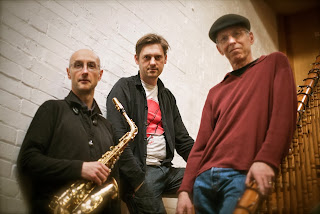 This unusual trio of alto saxophone, guitar and drums brings together three musicians who are committed to improvising in the moment and the gig will feature compositions from their new double CD 'Always A First Time', to be released on Martin’s Pumpkin label in early 2013.

"Martin Speake is one of the most interesting and rewarding alto saxophonists now playing jazz on any continent." Thomas Conrad  Jazz Times

"In a career that has spanned more than 40 years, drummer Jeff Williams has honed a sound that seamlessly blends a sinewy, propulsive rhythmic sense with a masterful appreciation of space and atmosphere." Matthew Miller, The New York City Jazz Record

"There is no musician with such complete control of the sounds coming out of a guitar. Mike Outram plays the sweetest wailing rock guitar in Britain. It’s a sound of great beauty." Seb Scotney, London Jazz