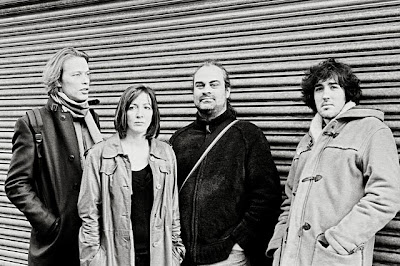 Matt Anderson got in touch to spread the word about this upcoming gig at Sela...

On October 15th, Sela Bar welcomes a band that have been described as 'catching the current wave of Brit Jazz', Compassionate Dictatorship. Led by two LCoM graduates and former lecturers Jez Franks (guitar) and Tori Freestone (tenor sax) and joined by Dave Manington (bass) and James Maddren (drums) the group have been touring extensively since the release of their debut album in 2007, followed up by a well received second album in 2010, Cash Cow and are now promoting their third album, Entertaining Tyrants.

As well as their performance at Sela, the group will also be running a workshop at Leeds College of Music between 4pm and 6pm.

Tickets for the gig are £7/£5 and are available from Matt Anderson or behind the bar at Sela.
Posted by Editor at 06:01