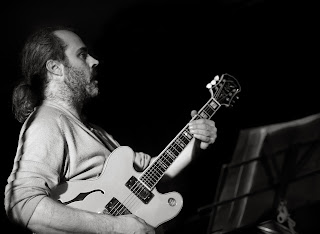 The group Compassionate Dictatorship has been described as ‘catching the current wave of Brit Jazz’ and this is no mistake. The group’s intelligent, tenacious music has been well received by audiences and critics nationwide and on the 15th October the group came to Sela Bar in Leeds whilst on tour promoting their third album Entertaining Tyrants. The group is co-led by the formidable front line of Jez Franks (guitar) and Tori Freestone (tenor sax) and also features bassist Dave Manington and everybody’s favourite drummer, the brilliant James Maddren.


The group presented a set of engaging originals showing the full breadth of their compositional and improvisational skills, from the angular and frenetic to the serene. ‘Bubble and Sqeak’ by Jez Franks was a stand-out tune in the first set, and includes a knotty and fragmented head, played with fantastic phrasing by the tenor and guitar. A sparse groove from the rhythm section complimented this well, but as the tune continued the musicians really opened up and the piece stretched its wings and grew into a real rocker. Tori Freestone in particular responded to this energy and took a ferocious solo, channeling Joe Henderson as Maddren’s drums fuelled the fire. Dave Manington’s bass was solid as a rock throughout and Jez Franks’ choppy, percussive comping was the perfect choice to leave enough space for the rest of the group to breathe.

Elements of free improvisation were also thrown into the melting pot along with jazz, funk and rock influences, such as in the tune ‘Chop House’, a dedication to Neil Yates written by Tori Freestone.  After a delicate head, Tori and Jez played an open, fluid improvisation together in a measured, tasteful way, creating some lovely textures before a gorgeous bass solo from Manington.

A highlight from the second set was the intense opener entitled 'The Mushroom Effect', including another great bass solo and traded solos from Franks and Freestone. These exchanges showed two musicians at the top of their game, simultaneously challenging and complimenting each other in an ego-less sparring match which showed their playing to be simultaneously intellectual and instinctive, impassioned and controlled. Maddren’s twisted afro-cuban groove was infectiously energetic and the whole piece showed the group’s phenomenal rhythmic vitality and authority.

Compassionate Dictatorship proved that they deserve the accolades they have received so far and that they should expect more in the future. The set was uncompromising yet accessible and showed a careful balance between tasteful restraint and ‘sturm and drang’ aggression and risk taking. Many jazz musicians could also learn from Jez Franks’ charismatic announcements, the humour of which was a great foil to the intensity and beauty of the music and which really helped to include the audience in the concert. A fantastic performance and a group to watch.
Posted by Unknown at 11:10