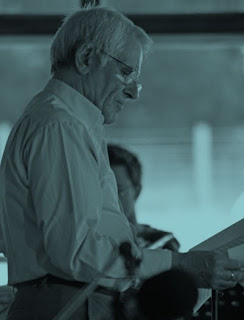 Celebrated Northern composer and arranger Tony Faulkner has launched a Kickstarter campaign to help fund his new project, a CD and US/Canada tour featuring the music of Pepper Adams.

Faulkner is flying over from Leeds, England to travel with me for four weeks. Clinics, lectures, and performances are scheduled in Cincinnati, Champaign IL, Macomb IL, Detroit, Toronto, New York, Teaneck and Montclair NJ, and Williamsburg VA, with a number of other exciting events still in progress.

We do this because of our passion for the music and our commitment to Adams' legacy.  Pepper Adams is one of jazz's few post-war stylists; as complete a musician as we've ever had.  Yet, he's still very little known by jazz fans and musicians, except for all baritone saxophonists worldwide, who idolize him.  Adams' compositions too are little known.

The Kickstarter goal is $7,000 and so far they have raised $1,475 with 23 days left to go. There are a number of rewards on offers for contributions, including arranging lessons with Tony, copies of the arrangements and dinner with Gary Carner.