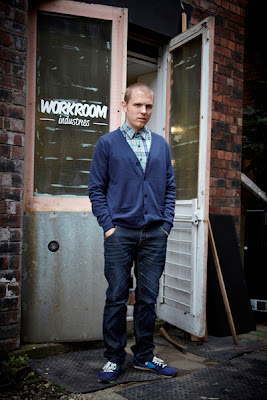 “Guitarist Stuart McCallum’s compositions are exemplary of everything that is exciting about new British jazz.” (Jazzwise). What is the best way to describe Stuart's career in music so far? Diverse, certainly. Ambitious. Impressive. There are few corners of the music world that he hasn't found himself in - he has worked with jazz musicians like Kenny Wheeler, John Surman and Mike Walker. His work with the Cinematic Orchestra has taken him all over the world from The Royal Albert Hall, to Montreal Jazz Festival, to Coachella. He has collaborated with artist Linder Sterling on large-scale improvised works and recently composed a score for a Ballet in collaboration with the Northern Ballet Company. (He has even written music for Disney...) On Saturday, he brings his trio with Dave Walsh and Les Chisnall to HEART in Leeds.

How is 2013 going for you so far - what's keeping you busy and what are your plans for the rest of the year?

I've been really busy so far this year. I wrote a score for a ballet (in collaboration with linder and the northern ballet company) which premiered in Paris in January and is coming to the UK from May. I've done a track with rapper Iron Braydz which is gonna be used in the soundtrack to a film which is being filmed at the moment. I've nearly finished writing and producing an album with Manchester vocalist, Rioghnach Connolly, which also features Luke flowers and Phil france (drums and bass from Cinematic Orchestra). I've been busy doing gigs to promote my 'distilled live' album which came out on naimlabel last November, as well as playing with bjork's drummer and percussionist, manu delago, on his UK tour to promote his new album. Plans for the rest of the year? Well, there is a short tour with french musicians, Laurent de Wilde and Laurent Robin, which is funded by SACEM in france and ACE in the UK. I'm starting work on the follow up to 'distilled' in june which is gonna be produced by london based drummer, Richard Spaven (jose james, flying lotus, cinematic orchestra), and recording an acoustic duo album with mike walker.

You've been doing a bit of gigging as a duo with Mike Walker, who was your teacher wasn't he? How did Mike influence you as a player and teacher?

Mike was a great teacher for me when I was at university. The main thing he taught me was how to practice - how to look at a problem and deconstruct so that you can practice it and in time be able to do it.

You perform in a diverse range of setting and styles - is that a conscious decision or has it just happened that way?

I just like a lot of different styles of music I suppose, so I don't want to be constrained to playing a particular genre. I'm more interested in the emotion, feeling and narrative that's portrayed in the music as opposed to the genre.

When you write, is there a compositional method you follow?

I suppose from writing and recording 3 solo albums, as well as working with and learning from other people, I've developed a bit of a method when I'm writing. The main thing to develop is a high level of quality control and how to use the delete button! I think you need a balance between a methodical approach and unstructured creativity to attempt to create the sounds that you want.

You obviously have a very busy schedule - how do you approach practice - do you still practice a lot, and what do you work on?

I just practice when I get time, but generally I do some everyday. I mainly practice my own music now but also still practice rudiment type stuff as a warm up - scales, arpeggios, chords, etc. Just the nuts and bolts stuff to keep my muscles feeling loose.

What sort of music have you listened to recently - is there a musician or album you've been drawn to?

I've been listening to a lot of electronic music recently - the new Thom Yorke project - Atoms for Peace for example. Other things I've had on are James Blake's new album, Martin Simpson (folk guitarist) and Keith Jarrett's solo concerts form Paris and London (he always makes me realise how shit I am at music!)
Posted by Editor at 03:38