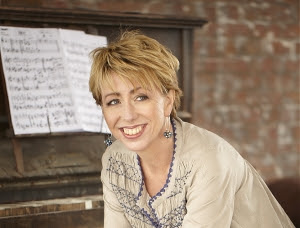 Pianist Nikki Iles is celebrating her 50th birthday with a UK tour featuring her group, The Printmakers. The group, which was nominated for a Parliamentary Jazz Award for Best Band last year, will perform across the country between May 2nd and June 5th. As well as doing that, what else does one of the UK's most sought after jazz musicians fill her time with? Well, she is writing a series of books for Oxford University Press, gigging with a number of different groups and maintaining a busy schedule of educational engagements in the UK and Europe.

Perhaps we can start off by talking about the Printmakers.

It was initially formed in its first incarnation after Steve Mead at The Manchester Jazz festival asked me to form a band of any musicians I liked. It was a dream come true! I had known Norma since I was 18 as a student at The Wavendon All Music Course and had always loved her singing from the first moment I heard her. Mike Walker was the next obvious member having met him in Manchester and have had some of my most formative musical experiences with him. I had met Mark Lockheart years ago , playing with  Steve Berry's group and was taken by the depth of feeling in his playing and knew this nucleus  would be exciting .Finally we have found the personnel that seems to really work with the wonderful partnership of Steve Watts and James Maddren.


Is the material you play written specifically with those musicians in mind?

Absolutely. Its so much easier for me to write or choose specific tunes when you have the musicians voice in your ear and the combinations within the group.

This tour marks your 50th birthday. How do you feel as you look back on your musical career so far, and what do you see when you look forward?

The word "career" always makes me feel uneasy . I've never made a single decision because of a career move , its always about the relationships I forge with musicians and finding kindred spirits that lead you on. I feel I've been so fortunate to have been able to have a rich musical life, with playing being  at the centre of it , but equally as a composer and teacher. All three have fed each other with something new to learn every day. Looking forward , we are finally going to record The printmakers and hopefully work more with it . I have a busy year with Stan Sulzmanns big band tour , Julian Arguelles Octet , Karen Sharps tour , Joe Locke etc. I also am finishing a four book jazz piano series for Oxford University Press with more to come.

As well as performance, you're involved in jazz education. Do you have a teaching philosophy? What do you think is of central importance in teaching jazz?

One of the most important things for me  to teach is how to learn. By helping people to understand how to figure things out for themselves or apply a particular process to another situation, discoveries will be made .

Your household is a pretty musical one, isn't it?  Pete (Churchill) is a musician and teacher too, and your son Fraser is a singer isn't her? Do you discuss music a lot, or practice with Pete?

It is a pretty musical one. However we are very different musicians. I need to have regular contact with the piano, whereas Pete is a big thinker and spends a lot of time with music in his head, then he writes! We have been careful to not assume the children will go into music. However, it is all around them, particularly our 10 year old...but she thinks everyone has a similar household  so knowing all the tunes off the latest Kenny Wheeler CD or Stevie Wonder all seem part of the same exciting thing , which I suppose they all are.