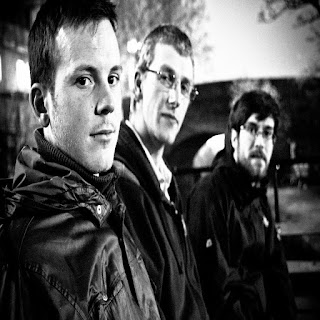 Over the last few years, bassist/band-leader/composer Paul Baxter has built a reputation in the UK and abroad as an ambitious, creative and exciting musician. Originally based in the North and recently moving South to study for a masters degree at Trinity College of Music, you will likely recognise his name from the many groups he leads and writes for - The Give A Little Love Jazz Orchestra and the 3 smaller incarnations of the Horace Silver band - 5/6/7 Pieces of Silver, The Paul Baxter Quartet and The Potter Ensemble.

Baxter formed Eyes Shut Tight 3 years ago with pianist Johnny Tomlinson and drummer Kris Wright, and the group have released two albums - their debut 'Evolution' and most recent release 'The Thaw' - and have performed across the UK. Described as "sophisticated and skillful", their 2013 UK Tour provides audiences across the country the chance to see this tight-knit, forward-thinking group perform live.


The music that we are performing on our 2013 tour is material which will feature on our next album 'Resonance'. This music is born out of the intuitive group dynamic that has developed over the last 3 years of performing together and is awash with influences from the likes of 70's Jarrett/Motian/Haden trio, The Bad Plus and EST. However the three of us have such a wide and eclectic range of influences that, for me, really creates an interesting overall sound and proves the idea of  “The whole is greater than the sum of its parts.”
The two gigs that we are playing in Yorkshire are at The Square Chapel, Halifax and 7Arts in Leeds. We will be recording the performance at the Square Chapel as the second of the sets will feature material from our last album 'The Thaw' which will then be put out as a live album later in the year. We are very excited about both these gigs as we very rarely get chance to perform back in the Motherland!
Eyes Tight Shut Tour Dates -
Wed 6 Mar - Dempsey’s Cardiff, 9pm.
Fri 8 Mar - The Square Chapel, Halifax, 7.30pm.
Sun 10 Mar - Seven Arts, Chapel Allerton, 1pm.
Sun 10 Mar - The Splinter, Newcastle, 9pm.
Fri 15 Mar - St. Peters, Kennington, 7.30pm.
Sat 6 Apr - Gateshead International Jazz Festival.
Fri 12 Apr - Birmingham Jazz, 8.30pm.
Posted by Editor at 03:22