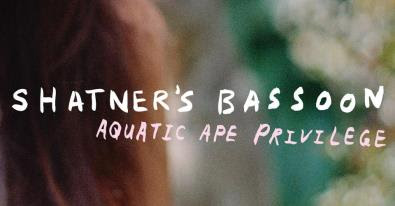 Shatner's Bassoon are shaping up to have a busy 2013, having already embarked on a UK tour (January 15th - 8th March), released an album (Aquatic Ape Privilege, released February 11th on Wasp Millionaire) and been selected to be part of Jazz North's northern line scheme.

From the Riotsquad Press Release -

Shatner’s Bassoon sound like nothing you have ever heard before! Part of the same experimental Leeds music scene as Trio VD, Roller Trio and Matthew Bourne they are a group of six Leeds based composers/improvisers who came together in 2010 and simply have to be heard to be believed! They make that music ranges from dense free noise through intense riffs and ambient textures. They deliberately play with musical clichés and conventions to produce music that negotiates a path from the darkly beautiful to the throbbingly sinister, humorous and surreal.

Influenced by contemporary artists such as Tim Berne, Mr. Bungle, John Zorn, Frank Zappa, Tyshawn Sorey and a broad range of rock and electronica; and with a combined experience that includes eastern European folk, Hindustani music, Brazilian music, straight ahead and free jazz, reggae, metal, contemporary classical and musique concrete; Shatner’s Bassoon have developed a unique collective sound based on developing complex compositional structures through improvisation – in turn allowing the music to be naturally infused by their experiences.

www.shatnersbassoonband.com
Posted by Editor at 06:48