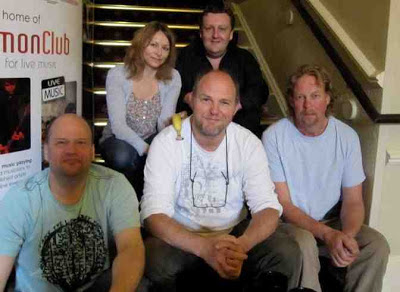 Jazz North's Northern Line scheme hasn't officially started yet, but the Mike Walker/Iain Dixon quintet proved themselves worthy ambassadors of jazz in North on Friday, appearing to a packed audience at Wakefield Jazz.

There are no egos in this band, though it could be forgiven if there were, as these five musicians are some of the most interesting and exciting in the country; and their impressive musical CVs confirm that this belief is widespread amongst the jazz musicians of the UK and abroad.

Saxophonist Iain explained that the band was put together to play tunes they enjoyed in small jazz clubs around the country, and the long-term friendships and musical partnerships within the band shone throughout the gig. They kicked off, as I correctly predicted, with Ladies in Mercedes. This has become a trademark tune of Walker (though written by Impossible Gentleman bandmate Steve Swallow). Relaxed and light-hearted yet gently complex, it sums up the band perfectly. Dixon and Walker are a great team - they blend well when playing melodies together and having played together for many years, can take the music off in many directions with ease. Bill Evan's "Show Type Tune" confirmed that pianist Les Chisnall's lightness of touch and melodic sense is hard to beat. It also confirmed that Iain Dixon is as good a compere as he is a saxophonist. "Les and I have decided to record an album." Dixon stated after the tune finished. "It'll be called Nobody Digs Les Chisnall."
Walker's arrangement of Solar was a highlight. Everyone got to stretch out and it was brimming with energy. Drummer Caroline Boaden drives the band from the back, unassuming but incredibly impressive.

The repertoire was varied and featured originals by Dixon and Walker (Wallenda's Last Stand, Wakey Wakey and Clockmaker) as well as one of their long-time favourite tunes, Stompin' At Savoy. Such a broad reach of material could sound disjointed, but the band sound is so distinct that the listener is happy to follow wherever they lead. It was an evening of smiles, both from band and from audience and we're looking forward to seeing a lot more of this group in 2013.
Posted by Editor at 17:32

Thanks Kim - a brilliant summary of their affecting music. Terrific propaganda for the North.