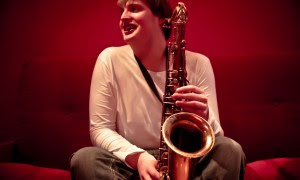 It's only January, but tenor saxophonist Riley Stone-Lonergan has been named "One To Watch" by both Jazzwise and Jazz Yorkshire. 2012 Yamaha Jazz Scholar Riley has spent the past year since graduating from LCoM performing across the UK, as well as Italy and Ireland. Holding the tenor chair in NYJO (alongside another of Jazz Yorkshire's "one to watch", Nadim Teimoori), he performed at the Royal Albert Hall as part of the BBC Proms. The performance was broadcast on BBC tv and radio.

We caught up with Riley to talk about who he listens to and what his plans are for 2013...


What projects are you currently involved in?

I do a lot of work with NYJO, which is a great experience - I've done some great stuff with that band (The Proms, recorded an album, worked with Tim Garland etc). And then through NYJO, I've met a lot of musicians that I work with in other settings - people like Dave Drake, Laura Jurd, Nick Dewhurst, Scott Chapman and Conor Chaplin etc. Up north, I've been working with Tony Faulkner and the Yorkshire Jazz Orchestra and a lot of people I studied at LCoM with.

I'm doing a lot of writing at the moment and putting together some of my own projects [his new quintet with Kim Macari, Steve Hanley, Tom Riviere and Declan Forde are playing at Pave on February 17th] I also have a new trio with Garry Jackson and Steve. I'd like to gig a lot with these groups in the coming year, and I'm planning to record an album too.
I'm involved in some really exciting projects as a sideman as well - I'm involved in two projects with Kim Macari's Apollo Jazz Network - one in February with a great scottish singer called Jude Williams then in July with LOCUS, a sextet with NYC saxophonist Leah Gough-Cooper. Those groups are gigging all over the UK and recording too.


What are you listening to at the moment - do you have a current favourite artist/album?

I've really got into Mark Turner recently, specifically his first album and Sky & Country by FLY trio. Also, Sonny Rollins trio stuff is amazing, like Way Out West, Live At the Village Vanguard, Live in Europe. And pretty much anything John Coltrane ever recorded - I have had a life-long love of his playing.


What do you like about the jazz scene in Yorkshire?

The young jazz community in Yorkshire is really pro-active - there are a lot of guys running jazz venues, networks and collectives - taking their careers into their own hands and being very ambitious. There are a lot of venues that are well-run and putting on a lot of really high-quality jazz - which is amazing because they're run by volunteers and do it purely because it's their passion - we all owe a lot to them.