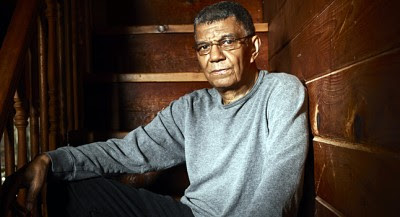 Anticipation ahead of this gig has been felt in the Yorkshire jazz community for many months, so it was no surprise to see that Leeds Howard Assembly Rooms had sold out - every one of its 300 seats filled.


Notable before the band even took to the stage was that the number of instruments on stage far outweighed the musicians about to play them. Grand piano, 2 synths, a nord, Bb clarinet, Eb clarinet, tenor...Even a pocket trumpet sitting on top of the piano.

DeJohnette spent time introducing the band and singing their respective praises; it was clear how much friendship and mutual respect there was between the musicians. He then introduced the first set so they could play uninterrupted.

It was a slow-building first set with 3 tunes - Blue, One For Eric (written for Eric Dolphy) and Tango African.  Every member of the group had the chance to stretch out over each tune (Pianist George Colligan and saxophonist Don Byron making use of all the instruments on stage) but it was Don Byron who shone through, contributing to each tune with versatility, fluidity and a great command of the instrument(s).

The second set contained 3 tunes, all of which were dedications to people close to DeJohnette. The opener, "Lydia" for his wife of 40 years was a change in direction from the previous set - uplifting and synth-heavy. "Ahmad The Terrible" for Ahmad Jamal gave Byron a chance to showcase his formidable technique with a solo sax introduction. The encore was a nod we had all been expecting/hoping for, a fusion/funk piece simply entitled "Miles."

With the majority of material written with very different musicians in mind (Dolphy, Ahmad Jamal, Miles), the gig moved in a lot of different musical directions and styles, never quite settling. However, it was indicative of DeJohnette's desire to write new material and continue to push himself, which in a man celebrating his 70th birthday is something to be applauded.