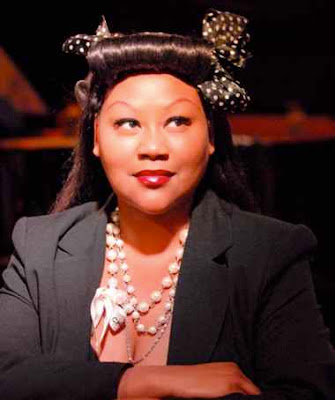 The Wakefield Jazz Christmas Party on 14 December will now feature Nicola Emmanuelle with the Dirty Martinis as original booking Lea DeLaria has become unavailable due to a knock-on effect of the super-storm Sandy's flooding of New York.

Chris de Saram of Wakefield Jazz says
"The party will be a three set gig starting with food in the first interval and a monster raffle in the second. Janette Mason has appeared three times at Wakefield and has immense experience as a musical director here and in the USA. When Lea DeLaria became unavailable for this gig she tracked Nicola down, then working in France, and recommended her as power personality to fit the bill.

A very experienced singer, Nicola is the UK-born daughter of South African parents with a jazz pedigree. She has appeared at Pizza on the Park and The Hideaway as well as featuring in numerous film scores.

Backed by the “dedicated” party band Dirty Martinis - Janette Mason - piano, Rob Updegraff - guitar, Paul Mason - bass and Martin France - drums, enhanced by a horn section with Paul Booth (saxes) and Quentin Collins (trumpet) – who could resist? This will be a night of entertaining jazz to be remembered for a long time to come. Book early and make sure you’re not disappointed."

“.. . . . she’s a crowdpleaser whose sunny personality comes across in her vocals. Her standards moved from gentleness to power with no visible effort, and her timing was relaxed at every tempo. Her diction was impeccably clear, too.” Jack Massarik, London Evening Standard

www.nicolaemmanuelle.com
Posted by Jazz North at 02:03