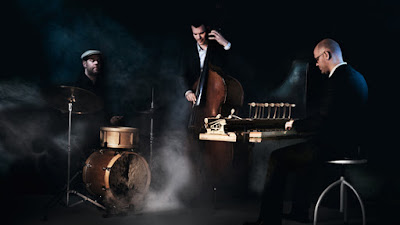 Swiss trio VEIN are to perform in Huddersfield on Saturday 29th. Michael Arbenz, Thomas Lahns and Florian Arbenz are recognised throughout the world for their tight interplay and their album Jazz Talks, featuring Dave Liebman, was released to critical acclaim including a 4 star review in the Guardian.

There certainly is no special need any more to mention the fact that today most jazz piano trios are deeply attached to musical interplay (even though this fact isn’t to be taken for granted!).  And yet, even with the most subtle, most distinguished form of interplay there is always one in the trio who plays the part of the primus inter pares – the pianist, of course (usually and by definition leader of the group).  That’s exactly where pianist Michael Arbenz, drummer Florian Arbenz and bassist Thomas Lähns come up with their own idea of musical interplay.  In fact, what they aim to achieve with their music – their understanding of music – is nothing less than the greatest possible balance of their three voices – starting with the way they work out their own compositions and arrangements, and going right through to the soloistic parts, fully assigned to all three of them.  The result is a stupendous musical togetherness, packed with surprising melodic, rhythmic and dynamic turns, played with highest precision even in the most complex, distorted and twisted passages of their compositions, arrangements and solos.

Tickets for the gig cost £14 (£5 for students) and can be bought through the Huddersfield Jazz website.
Posted by Editor at 03:57