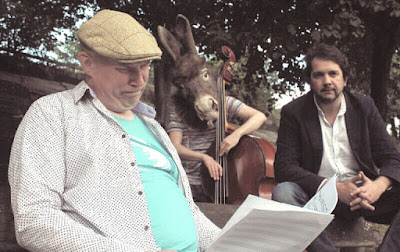 Jamil's back catalogue as asideman and band leader is impressive but this is first time he has fronted a trio for an album.

Jamil is known throughout the UK Jazz scene for his lyrical and rhythmic approach to original music, and this latest project is no exception. Carefully developed through-composed elements are interwoven with freer improvisations and swinging solos, showing Sheriff to be an artist with a unique identity. His approach brings together a mixture of influences as he endeavors to find common and genuine ground between a wide ranges of styles. He is a passionate ambassador of creative arts grown in the North of England, and invests much time, as an educator (Head of Jazz at Leeds College of Music) and performer, supporting the development of regional scene. Recent collaborations include work with both emerging artists and acclaimed performers such as Ingrid Jensen, Henry Lowther, Dave Lyttle, Tom Harrison, Colman Brothers, Gareth Lockrane, Richard Iles, Neil Yates, Matt Anderson and Josh Kemp. Composition remains at the heart of Jamil’s artistic output, and the trio (formed in 2013) provides him with the space to explore freer elements. The ensemble was initially part of Jazz North’s Northern Line and in 2014 toured China for two weeks before recording ‘Places Like This’.

To celebrate the launch of the album, the trio will perform a number of tour dates between November and January. Full list of dates below but if you'd like to hear the album or buy a copy, visit the News Jazz Records site.