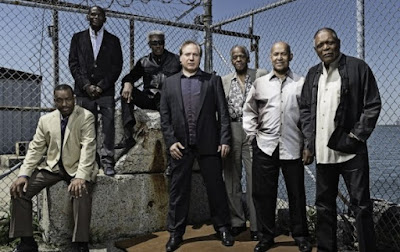 The Cookers, a supergroup if ever there was one, are only playing 4 UK dates during their European tour and the North is lucky enough to host two of them - Sage Gateshead on November 14th and then at Band on the Wall in Manchester on November 15th.

Collectively, this is a band with over 250 years playing experience and over 1,000 albums released. If that isn't worth braving the cold November nights for, I don't know what is.

Billy Harper, Cecil McBee, George Cables, Eddie Henderson, and Billy Hart all came up in the heady era of the mid ‘60s. It was a period that found the dimensions of hard bop morphing from their original designs, and each of these guys helped facilitate the process as members of some of the most important bands of the era. Hart and Henderson were members of Herbie Hancock’s groundbreaking Mwandishi group; Cecil McBee anchored Charles Lloyd’s great ’60s quartet alongside Keith Jarrett and Jack DeJohnette; Billy Harper was part of Lee Morgan’s last group, as well as being a member of Max Roach’s Quartet and Art Blakey and the Jazz Messengers; while George Cables held down the piano chair in numerous bands including groups led by Sonny Rollins, Joe Henderson, Freddie Hubbard, Dexter Gordon and Art Pepper.
David Weiss and Donald Harrison, from a more recent generation and the youngest members of the band, are experts in this forthright lingo, having gained experience performing with Art Blakey, Bobby Hutcherson, Freddie Hubbard, Charles Tolliver, Roy Haynes and Herbie Hancock.

The band have been together for 7 years and these two dates are sure to be unmissable - a band made up of musicians that played integral parts in jazz history coming together to create something new.