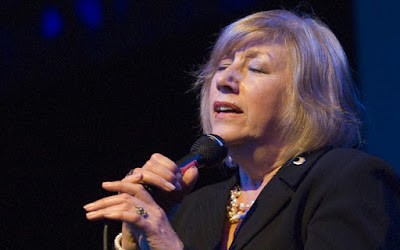 Vocalist and national jazz treasure Norma Winstone is to perform at the Dean Clough in Halifax on September 15th in a special 75th Birthday concert.

Joined by the Printmakers (Nikki Iles, Mike Walker, Mark Lockheart, Steve Watts and James Maddren), she will perform a range of material including music from the Printmaker's debut album, Westerly.

Tickets for the event cost £15/12 and can be booked through the Dean Clough website.

Inevitably Norma cut her teeth on ‘standards’ but it was the way that she developed the improvisational use of her voice that marked her out as a performer. Early confederates included the likes of Mike Westbrook, Michael Garrick, John Surman, Kenny Wheeler and John Taylor. She was voted ‘top singer’ in a Melody Maker Jazz Poll as early as 1971 (her solo album of the period, ‘Edge of Time’, has been twice re-released as a CD).

In the late Seventies she joined forces with Kenny Wheeler and John Taylor in the trio, Azimuth, whose ECM releases became a byword for jazz excellence over the next 17 years. Far from being subsumed into a group ethos, though, Norma has always effortlessly retained her individual profile — her 1986 album ’Somewhere Called Home’, for instance, is generally hailed as a classic.
As someone renowned for her wordless singing technique, there is a certain irony in the fact that Norma has in recent years become credited as a fine lyricist. ‘Ladies in Mercedes’ (written for a Steve Swallow composition) is only the most prominent among a host of songs that have attracted cover versions alongside her own lauded performances.
By the millennium Norma was issuing regularly acclaimed CDs with peers such as Fred Hersch or Stan Tracey & Bobby Wellins — but in 2002 issued her first CD with pianist Glauco Venier and Sax/clarinet player Klaus Gesing. The latter ‘trio’ has become one of her most frequent incarnations, not least because of their compelling ECM release, ‘Distances’, in 2007.
And of course, Norma’s other frequent ‘group appearance’ has been with The Printmakers who are, unquestionably, the equal of any jazz band you could put together from a UK stable. While mention should be made of Norma’s MBE (2007) and her 2015 success as Jazz Vocalist of the Year in the Parliamentary Jazz Awards — it’s the music that really matters. This Spring the Printmakers released what is — almost bizarrely — their ‘debut’ album ‘Westerly’. No doubt we’ll get a taste of it in tonight’s performance; because birthday celebration or no, it’s hard to imagine Norma being anything other than contemporary…
Posted by Editor at 09:34