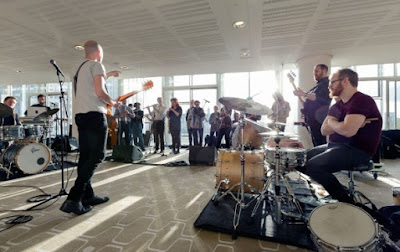 Guitarist Chris Sharkey has been commissioned by Serious to create a new piece of music which will be performed at Gateshead and London Jazz Festivals. The piece is called Make It/Break It and is a very ambitious work which will be see over 100 musicians taking part.

Chris has put a call out today for more people to be involved in the performance at Gateshead Jazz Festival this coming Sunday (April 17th).

Musicians of the North East of England! I'm doing something at Gateshead International Jazz Festival 2016 on Sunday and want you to be part of it. It's called Make it/ Break it.  We get together for one day, make something, perform it once, then it's gone. I'll need you for most of the day (from around 11am) then we play at 6.30 in the concourse which will be PACKED with people.

ANYONE, regardless of instrument or ability can be a part of this.

If you show up, I'll give you something important to do.

There is NO DEADLINE and NO SELECTION PROCESS.

Reply to the email in the link below, hit me up [on facebook] or just show up on the day.


For more information, see the event page on Sage Gateshead website. (The article states a deadline of March 18th for people who wish to be involved but as Chris says above, this is not the case!)