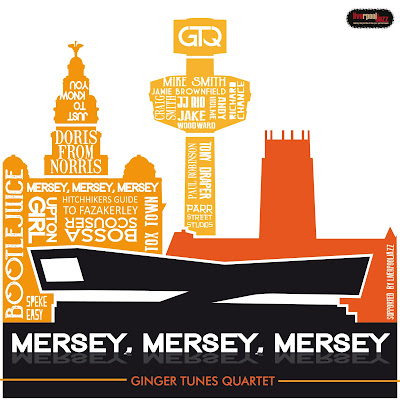 The album was produced with support from Liverpool Jazz. (a project which we reported on recently, read the full article here)


This album is a reflection of Merseyside. It is a celebration of the city that has given me, and so many others a life in music. With its diverse cultural roots and chequered history, Liverpool has retained its defiant humour and will always be the home of artistic mischief. This is a sentiment worth celebrating, and one we hope to have captured in the live recording of this album. Each player brought their sense of fun and good humour to the studio, and you can hear it in every note.
Titles include:

Upton girl
Hitchhiker's guide to Fazakerley
Tox town
Bossa Scouser
Ginger Tunes have been playing together for over a decade and have built up a strong following. They will appear at the jazz festival as part of the Liverpool Jazz showcase at Capstone Theatre on Sunday 28th February at 1pm. Admission is free.
You can find out more about the band on their website and the new album can be purchased on iTunes here.