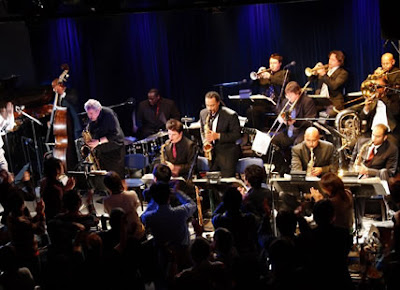 Howard Assembly Room in Leeds is starting 2016 with a bang with an exclusive performance by the Mingus Big Band ahead of its 12 show residency at Ronnie Scotts.

The band, led by the bassist's widow Sue Mingus, has a huge international reputation with performance schedules that span Europe and the US, 10 albums and 7 Grammy nominations. The personnel has read like a who's who in jazz over the years with people like Randy Brecker, Seamus Blake, Dave Kikoski, Conrad Herwig and Jeff 'Tain' Watts occupying chairs.

This is a gig that's sure to sell out so audiences are advised to book early through the Opera North website. Find out more about the band on their website.

A great evening with the band playing a mix of classic Mingus and new pieces assemble from sketches after his death. Wonderful sax solos from the two tenors, blistering playing from Luis Bonilla on trombone and blues smeared playing from Philip Harper, very reminiscent of Lee Morgan were the highlight for me plus the playing of Kevin Holbrough a Leeds based trombonist deputising for Chris Bates lost in transit due to the American east coast blizzards. What a gig to to get. just shows what pro he is.