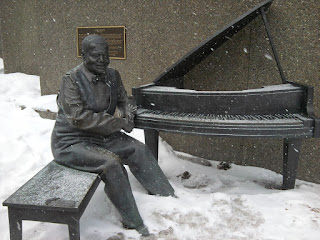 Marsden Jazz Festival have not long finished their 2015 edition but work is already under way for next year which is their 25th Birthday. This festival, set in picturesque surroundings, draws over 10,000 visitors and their programme contains mainstream acts, international names, fringe events, contemporary improvised music and everything in between!

This festival on the coast has been running for 5 years and runs over a weekend in Early November each year. Their focus is on swing and early jazz and they have a mixture of UK, European and American artists on the programme.

Run by Geoff Matthews in Southport, the festival celebrates its 12th birthday in 2016. Almost always a sell-out, the festival runs over a weekend and features a varied programme - there's always a strong international presence as well as up and coming artists and big bands.

This is a relatively new festival which runs from the Capstone Theatre in Liverpool and is programmed by Neil Campbell. Started up in 2013, the festival has so far programmed a number of big name acts from the UK and Europe and there is always a few Northern Line acts in there too, from Jazz North's flagship scheme.

Probably the most specific festival on our list, this one is a celebration of big bands. There is a competition in which big bands from music colleges, regional initiatives and  universities compete as well as performances and workshops over the course of the weekend.
Posted by Editor at 07:36