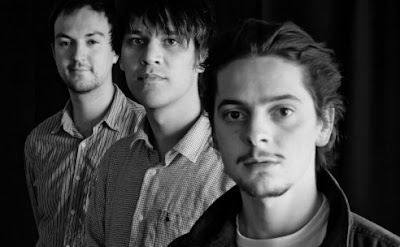 Glasshopper is a trio based in London led by tenor saxophonist Jonathan Chung and featuring Corrie Dick on drums and James Kitchman on guitar.

Influenced by the free, jazz, rock and folk worlds, the band performs Jonathan’s emotionally sophisticated compositions with reverence and abandon, intricately weaving together moments of sonic bliss and euphoric rock-outs. With improvisation at the heart of each performance, Jonathan, Corrie and James are unified in creating original interpretations that inspire fresh stories to unravel within the listener’s imagination…

Next month, they will embark on a short UK Tour fresh out of the studio after recording their first EP. Below are the dates of the tour and a short video featuring music by Glasshopper and animation by Firdaw Fourcroy.


Jenny by Glasshopper from Jonathan chung on Vimeo.
Posted by Editor at 03:06