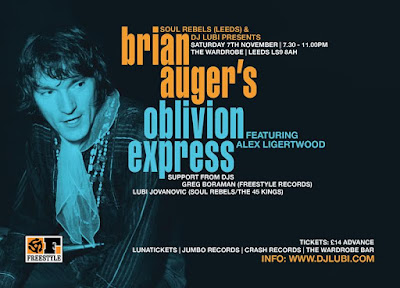 Hammond Organ legend Brian Auger is doing his first Leeds gig in years with his band Oblivion Express. On Saturday November 7th he will perform at the Wardrobe in Leeds with a band that features Alex Ligertwood.

Auger has been played with the likes of Jimmy Page, Rod Steward and John McLaughlin and had a Top 5 hit with Julie Driscoll covering Bob Dylan's Wheels on Fire in 1967.

It’s his first gig at The Wardrobe for over a decade and he brings with him his latest version of Oblivion Express. Featuring himself on Hammond B3 organ and electric piano, electric bassist Travis Carlton, drummer Karma Auger (his son) plus special guest and original 1972 Oblivion Express vocalist Alex Ligertwood on lead vocals and electric guitar. They’ll be playing a firing set of original song and anthemic Brian Auger covers from his extensive back catalogue, many which are featured on the “Back To The Beginning” anthology. Expect an amazing night of world class live jazz, blues, soul and rock all blended together in that unique Brian Auger way!

Tickets cost £14 and can be bought from Crash Records, Jumbo Records and from the Wardrobe bar. For full information on the gig, visit the Wardrobe website.