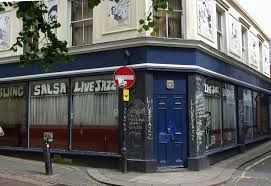 The Jazz Cafe in Newcastle has closes its doors for a few weeks for the summer break and will open again on September 1st. When they reopen, they will also have a new license which allows young people to attend gigs there until 11pm when accompanied by an adult. Plus they'll now be able to serve draft beers. In anticipation of their reopening, they have circulated details of their main events in September.

Winner of the Peter Whittingham Award, Mark Pringle has been wowing audiences and the musicians community recently. Graduating from the jazz course at Birmingham Conservatoire, he has since received a place on the hugely prestigious European Jazz Masters programme. This trio is the core of the larger 12 piece ensemble that make up Moveable Feast and will also feature James Banner and Euan Palmer.

Vocalist Alice Grace comes from an impressive start in jazz - singing with NYJO and degrees from Guildhall School of Music and Drama and Amsterdam Conservatoire. Since then, she has gone on to sing across the UK and further afield in Europe and in Dubai. Sitting alongside her work as a jazz singer, Alice also sings and produces drum and bass music. This quintet also features Peter Gilligan, Paul Gowland, Paul Grainger and Russ Morgan.

Trombonist Chris Greive has appeared many times in the North East with his trio NeWt. This time, he appears with guitarist Graeme Stephen and NE drummer David Carnegie play homage to the music of Led Zeppelin. “More structured episodes are interspersed with bouts of fiery free improv mayhem....Powerful and inventive music of a high order.” (The List)

Keep up to date with the goings on at the Jazz Cafe by visiting their website.