Chetham's Big Band & Jazz Ensemble at Band on the Wall 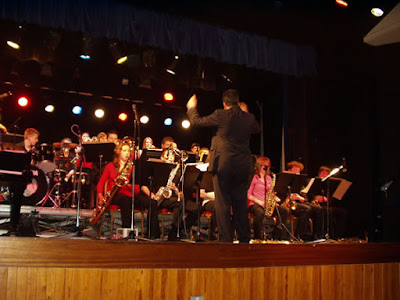 Chetham's School of Music is renowned nationally as a producer of highly skilled and talented young musicians. Set up in 1990, the school's big band programme has provided these young musicians numerous performance opportunities to play big band music live across the country, win countless awards and to perform alongside musicians like Bob Mintzer, Pete King, Bobby Shew and Tim Garland.

On 23rd June, the big bands and jazz ensembles from Chetham's will put on a concert at Band on the Wall in Manchester, led by directors Richard Iles and Jim Muirhead. The evening is a chance for audiences to catch the upcoming jazz talent ( the school boasts a number of respected jazz musicians among their alumni, including Phil Meadows, John Escreet and Alex Bone).

Tickets cost £10/8 and can be bought from the Band on the Wall website. The site also has listings for other upcoming gigs including Martin Taylor, Soil and Pimp Sessions and a special Jazz on 3 broadcast.
Posted by Editor at 05:33