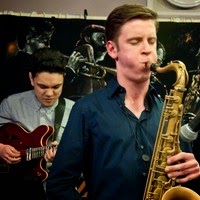 Tenor saxophonist and recent LCoM graduate Robin Porter has announced a string dates in December for his quartet, starting at Olivers in London on December 2nd.

The band is made up of four musicians who have all come through the LCoM ranks in the last few years - Jonathan Brown on guitar, Tom Hawthorn on drums and Sam Vicary on bass.

The group is described as being influenced by tenor/guitar led quartets like Scofield/Lovano and Rollins/Hall as well as figures from the NYC jazz scene like Ambrose Akinmusire and Aaron Goldberg. The group have performed at the Elgar Rooms as part of the BBC Proms (which was later broadcast on BBC Radio 3).