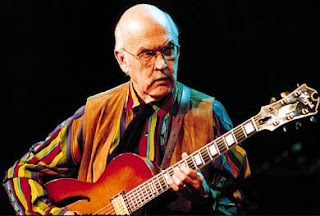 Only days after the passing of Stan Tracy, the jazz community is left reeling with the awful news that guitarist Jim Hall passed away yesterday. Hall died aged 84 in Manhattan Hospital after a short illness.
Jim Hall was a  true jazz legend and a father figure of jazz guitar, and in fact this was the title of his debut solo album, released in 1957. It is said that one can judge a man by the company he keeps, and if that is the case one can give Jim Hall the highest judgement as it was his wonderful collaborations that defined his career as much as his work under his own name. These collaborations included work with such giants as Sonny Rollins (Jim appeared as a special guest at Sonny's 80th birthday concert 3 years ago), Bill Evans, Ben Webster and Gary Burton among many others.

An astounding musician who will be missed greatly by the entire community.
Posted by Unknown at 03:25