Melt Yourself Down, jazz and soup: An Interview with Peter Wareham 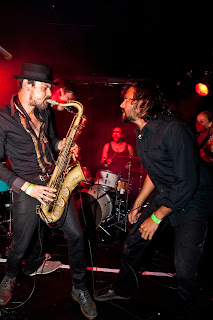 On a grey, washed-out Leeds afternoon I had the chance to speak to saxophonist Peter Wareham about his new group Melt Yourself Down, who are by anyone’s definition the opposite of grey and washed-out.


Leader of the trail-blazing but now defunct Acoustic Ladyland and member of Seb Rochford’s Polar Bear, Wareham has long been an exciting figure on the UK scene. However, when composing the music of Melt Yourself Down, Wareham has added some new colours to his usual palette of rock, free jazz and punk, adding African influences and elements of funk, psychedelia into the mix along with chest-thumping, sing-a-long choruses. Their eponymous debut album received rave reviews across the board and their infectiously high-energy shows have captivated audiences at venues and festivals across the country.


“After [Acoustic Ladyland] I just started experimenting” says Pete. “I had been writing to order for a really long time, so I started mucking around with some stuff I’d been listening to for a while- North African and Algerian music. I started transcribing that and playing around with it as well as doing some remixes and working on the production side of things. Then I was DJing one night and I played this track I was really into by a guy called Ali Hassan Kuban, and suddenly I thought that this was the kind of noise I wanted to make, so I started writing tunes like that.”

Shortly after this Pete assembled the formidable line up of Shabaka Hutchings (saxophone), Tom Skinner (drums), Ruth Goller (bass), Kushal Gaya (vocals), Satin Singh (percussion) and Leafcutter John (electronics/production), members of groups such as Sons of Kemet , Hello Skinny, Mulatu Astatke and Transglobal Underground.
“I’d been working with Satin in various latin bands and with Shabaka when he was depping [for Mark Lockheart] in Polar Bear. I’d played with Tom Skinner in various combinations over the years but we’d never been in a band together and obviously I wanted to keep working with Ruth [after Acoustic Ladyland]. For the first rehearsals, that was it. We didn’t get Kush along to sing until later”.

Although the ensemble is rich with musicians who are immersed both in the jazz tradition and in the cutting edge of the genre, Melt Yourself Down has not really manifested itself as a jazz group. The music certainly contains elements of improvisation and a heavy 'world' influence, but the structures of the songs, the vocal hooks and the heavy grooves of the drums and bass seem to come more from a rock or pop direction.
“I think jazz is an attitude really. I don’t see it as being something that has any particular aesthetic quality; it’s like saying ‘poetry’. Or like saying ‘soup’”, explains Pete, dryly. “I think it’s about being as good as you can possibly be, exploring and researching as far as you possibly can and then, within all that, working out who you are as a person and expressing that as best you can.  And making sure that people don’t get bored when then they listen to it.”

Whether you think it is jazz or not, I can safely say that there is no chance of boredom as an audience member experiencing the spectacle that is Melt Yourself Down. This is engaging, exhilarating and captivating music and they are certainly not a group to be missed.

Melt Yourself Down are playing The Deaf Institute in Manchester on the 27th November, The Wardrobe in Leeds on the 28th, The New Empowering Church in London on the 29th and The Exchange in Bristol on the 30th.

Photo by Jack Sheen.
Posted by Unknown at 06:49