Venue feature:
The Leeds Lock In 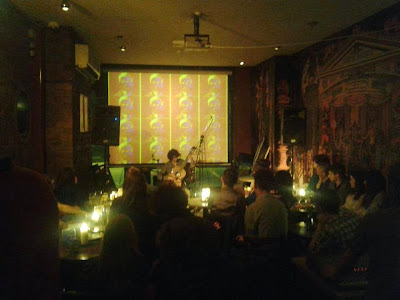 Once a month, in a dimly lit room with candles on the tables and strange projections swimming across a screen behind the stage, a hushed audience prepares for a night of the surreal. Anything from contemporary jazz to stand-up comedy, folk music, magic and punk poetry could be on offer (as well as the enigmatic host of the evening,  Mr Smith) and it's this unique blend of entertainment, as well as free cake, which brings people to The Leeds Lock In at Oporto.

I met up with Mary Ellen O'Shea, the woman behind The Lock In, to talk about her motives for beginning the night, its success, jazz and her plans for the future.

Mary Ellen ran the Lock In in Durham for two years and upon relocating to Leeds saw that there was a gap in the market for such an event there as well. She now presents the night with the help of her co-organisers Donnchadh O Conaill, Abi Sharp and Sarah Parkin. 'Leeds has vibrant scenes for jazz, folk, rock, comedy and poetry but you never get to see them all on the same evening,' says Mary Ellen. 'Something that makes [The Lock In] stand out is the variety of acts in one night…. The idea of juxtaposing the acts is very deliberate’.  As a frequent visitor to the Lock In, I can happily vouch for the success of this idea.  The contrast and variety of acts is truly refreshing and the acts themselves are always of a high standard.

'The audience know that because of the variation and relatively short duration of each act, they will always her something they like and this makes for a very receptive audience', Mary Ellen tells me, and this is something I've always found to be true in my visits. The audience at the Lock In is a very mixed crowd and yet they all willing to embrace the full breadth of acts that Mary has booked.


Space F!ght playing the Lock In


This is quite an impressive feat considering that many of the jazz acts that have performed at the Lock In in the past are not exactly on the most accessible end of the spectrum. Thanks to a collaboration with Jazz North, Shatners Bassoon and Space Fight! have both made appearances, and other bookings include solo performances by Roller Trio's James Mainwaring and recent Leeds College of Music graduate ensembles Sam Dutton-Taylor's Non- Lethal Death Robots and Ben Powling's Shark Squad. Each of these groups performs their idea of jazz with an uncompromising personal vision that would not necessarily be very palatable to a non-jazz audience, but at the Lock In these groups have always found a great response.

Perhaps this is partially down to the sense of the unknown that pervades the night and it is something that has delighted Mary Ellen. She speaks about it passionately, saying ‘For someone who isn't into jazz to enjoy [these groups] is a really significant thing! A lot of the time the audience will turn up for the poetry and comedy and then they will hear one or two jazz bands, but 99% of the time they'll approach me to say how much they enjoyed it, even though they didn't expect to.  I think it’s the live experience of jazz [that does this]. People who don’t like it have often only heard it on record.’

With regards to the future of The Lock In, Mary Ellen is aiming to search for funding to bring in acts from further afield (such as a recent appearance by the phenomenal Trio Riot from Manchester) and also to incorporate some contemporary classical music into the night.
In the short term, the next Lock In is on the 5th November and is entitled ‘The Dorothy Parker Memorial Lock In’. Each month, the night is in celebration of a different deceased person and past months have been in memorial of such diverse characters as Bruce Lee, Captain Beefheart and Tony Hancock. ‘The Dorothy Parker Memorial Lock In’ will feature jazz from The Matthew Aplin Trio, poetry from Rose Condo and singer/songwriter duo Hat and Coat among other acts.

Tickets are £2 in advance or £3 on the door include a free piece of cake. Search 'The Leeds Lock-In' on Facebook or find them at @LeedsLockIn on Twitter.