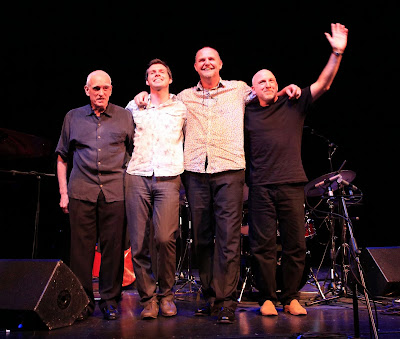 Seven Jazz have a busy weekend ahead with not one but two gigs by award-winning groups.

...[they]were recently voted “Best jazz group 2013” in the Parliamentary Jazz awards. Inspirational, dazzling, melodically enthralling music from two of the UK’s finest musicians with two great stars of the US jazz scene. Multi award winning pianist Gwilym Simcock has been named checked as a "genius" by no less Chick Corea.  Mike Walker  is one of Europe's most exciting guitarists and a big favourite of the Leeds audience. Steve Rodby has been the bassist with the Pat Metheny Group for the past 30 years. Drummer Adam Nussbaum’s work with Michael Brecker won him a Grammy in 1988.

On Sunday 20th October, Seven teams up with Leeds University in a joint promotion at Clothworkers Hall in Leeds featuring pianist Zoe Rahman.

Zoe is one of the brightest stars on the contemporary jazz scene -a vibrant and highly individual pianist/composer with a style deeply rooted in jazz yet reflecting her classical background, her British/Bengali heritage and her very broad musical taste. Having played sell-out shows this year with her Kindred Spirits album, pianist Zoe Rahman has just won Best Jazz Act in the prestigious 2012 MOBO awards.

This gig will take place between 3pm and 5pm at Clothworkers Hall, Cavendish Road, Leeds, Yorkshire, LS2 9JT
Posted by Editor at 05:24