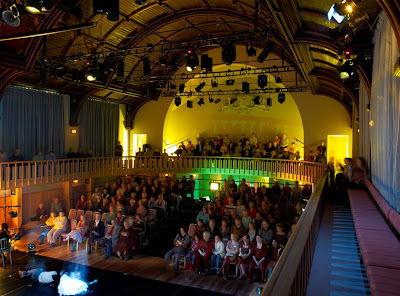 Howard Assembly Room have some interesting jazz (and Jazz-related) bookings coming up in their Autumn programme: Joanna McGregor: Graphic Scores, David Murray's Infinity Quartet with Mwamba/Kane/Blackmore and The Necks.

First off, on October 10th - Joanna McGregor: Graphic Scores. The website describes the event as

A transatlantic vision of music from the 1950’s to today, this specially created project is an enthralling journey into this re-imagined way of writing and performing music. The programme spans a wide range of handpicked jazz, classical and experimental music, ranging from recognisable notation to abstract art works by composers including George Crumb, Cathy Berberian and John Cage.
Joanna MacGregor’s virtuosity and creative energy is combined with a group of the UK’s most original musicians against the fascinating visual backdrop of projected scores.

So not strictly jazz but many of you are no doubt adventurous listeners (and watchers...?) so this will appeal.

Next up is David Murray's Infinity Quartet on October 19th. The American saxophonist is back in the UK for his first national tour in years, this time to promote a new record 'Be My Monster Love'. Murray has played with Elvin Jones, McCoy Tyner and Henry Threadgill and has won the Village Voice Musician of the Decade. His quartet features Rod Williams on piano, Jaribu Shahid on bass and Nasheet Waits on drums. This gig features support from Mwamba/Kane/Blackmore.

And finally The Necks on November 2nd. New York Times described them as 'One of the greatest bands in the world' and they have a long-established place in the jazz scene having been around for 25 years. The Australian trio is comprised of Chris Abrahams (piano), Tony Buck (drums) and Lloyd Swanton (bass).

Full information on all the gigs are on the Howard Assembly Room website.
Posted by Editor at 11:15