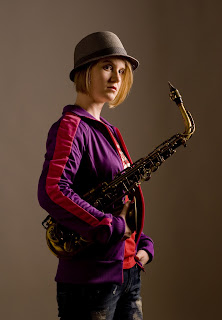 Scottish saxophonist Leah Gough-Cooper is returning to the UK from her home in NYC this month to tour with LOCUS, a group she co-leads with trumpeter Kim Macari.

Leah won an international scholarship to Berklee in 2005, studying with renowned saxophonists Jerry Bergonzi, George Garzone and Joe Lovano. In 2009, she moved to the New England Conservatory to complete her masters and since then, has lived and worked in New York City.She leads her own projects including Human Equivalent (with which she has released the album Future Pop) and has worked alongside musicians including Vijay Iyer, Danilo Perez and Fred Wesley.

You're back in the UK for a month - tell me about your plans while you're here.

Since moving to NYC a couple of years ago, it's been a busy time working & performing there, so getting time to travel to the UK (and, more speciﬁcally, home to Scotland) has become rarer. This summer trip over, I made space in my schedule to head back a couple of weeks before the LOCUS tour begins to see my family (which now includes 9 nieces and nephews), see and play some concerts with the home community of musicians (jazz, pop, whatever else is going on) and keep on working remotely on production work sent over from NYC! I've had a little down-time to relax, but I'm usually pretty good at making myself busier than I can sometimes handle, haha!

How have you found the process so far, building a tour and working on material for a band that live in different countries?

This experience with LOCUS has been an exciting one for me because it's the ﬁrst time I've really gotten to work alongside another great band-leader. Much of the time back in the US, I'm acting as a band-leader but doing every aspect of the project, from writing all the way through to as much of the management and "business" parts as I can muster. When you're doing everything yourself and have little-to-no extra ﬁnancial (or management) backing, it can be very easy to lose steam quickly. However, I am unbelievably grateful to be able to share the work-load with another strong musician (as well as a group that are up for a good adventure!): I've written 8 brand new compositions for the group, whilst Kim has been an incredible force with ﬁnding some exciting players, and venues and dates in areas I've never even gotten to visit before! The last aspect that's great and unique for me with this tour, is that I've never met the other musicians and they are all based in different areas of the UK. I've been given an idea from each of them as to what styles and kinds of music they enjoy playing in and listening to, so I've made an attempt to write for them and give them a vibrant range of compositions to dig into and interpret.

You've lived in the US for a number of years and that was where you studied. Where do you feel your musical home is? Does it feel different working in the UK vs the US?

It's true, I've now spent 8 years in the US, having gone there to study at Berklee when I was 16. I've had some great opportunities to perform in the UK over those years, normally in the summer-time during festival season back in Scotland, a little in Northern England and also at the London Jazz Festival back in 2009, with my band Human Equivalent. I'll be very honest, I can't really give any adequate comparison between the two scenes (even when it comes to Jazz) except that people should always hold the saying "The grass is never greener on the other side" close to them! The US is also a huge country and every city has a different thing going on. NYC is diverse and there's lots of different kinds of music to choose from, but because it's a "tough" city as it is, many venues are solely concerned with selling alcohol over the music itself (this is regardless of the genre). I don't think this is only a problem in the US, it's just the way the music industry is (and probably always has been). I know musically, I've made sure to get my hands stuck into a few different pies genre-wise, because they all help feed back into one-another and it's the only realistic way of surviving on creating and performing music alone. I love music as a whole, so I'm pretty much seeing which paths lead me down some exciting journeys and being very zen about the process and seeing what happens. There is a chance that being a foreigner (geographically) is the best situation for my personality and creative process at the moment: nothing has presented itself to me where I'd have to make a choice to commit, yet, haha! I have no idea if I'll stay in the US for the long term and I'm open to the idea of eventually settling in Europe for a session (I love Berlin after a recent visit: I've started dreaming about living there at some point). If there were solid opportunities offered to return to the UK, then I would be open to that, too!

You and Kim worked together in NYJOS and were both in Tommy Smith's youth orchestra in your teens. What did you take away from your experience in those groups?

I took away a lot from my experiences with TSYJO and also NYJOS. The Big Band (or Orchestra) is such a different beast from the smaller group setups. I haven't worked in a big band since my Masters at NEC, mostly because large groups are a luxury to be able to put together in a place like NYC. I loved the power and richness of the orchestra sound, and you learn some very valuable lessons about precision and blending as a unit. In Tommy's band, he made us work extremely hard (and not just for our age) with the material he gave us, and shared disciplined lessons on being the best musician and player of your instrument, which could be both classic and contemporary in nature. However, the one thing I realized I missed later down the line, working in such large groups as that (even with the orchestra at NEC), was the raw musical chemistry felt between individuals when they made the music together, that you can really feel almost immediately in smaller numbers. This is probably nothing new, but that aspect is very important to me. I played alongside Kim during one season many moons ago with NYJOS (I think it was just before I was heading over to the US to study), and I had a blast off of the band stand: with the Sextet this summer, LOCUS, I'm excited to return with this camaraderie again but with a more intimate numbered group on stage!

Tell me about a musician or group or album that you're excited about at the moment?

Oh, yikes, this is where I'm going to get caught out! I must admit wholeheartedly that my ears have been divided these days between Jazz but also Electronic music… I've always listened to both very religiously since I was very young, so I've always been drawn to musicians (no matter what side of the fence they officially sit on) who have taken leaps and risks in either style (or even melding the two together). So, I'll tell you about some records I've been listening to this past week or so -
Shostakovich's Op. 87: 24 Preludes & Fugues (performed by Keith Jarrett)
- Amazing recording, Jarrett plays with great emotion and, for me, takes the music to a different plain. Deﬁnitely worth a listen.
Pogo - Wonderpuff
- Pogo is an Australian electronic artist/musician I came across over a year ago who specializes in what you might call Sound Collage (taking samples from ﬁlm, t.v., anywhere etc. and re-arranging them into new compositions). The idea of taking snippets of sounds and creating something brand new with them is inspiring, inventive and doesn't sound as alien as some synthetic electronic music out at the moment.
Brian Blade Fellowship - Perceptual
- This is an old record (13 years old!), but I didn't come across it until very recently and, in my opinion, it's still sounds really fresh. The compositions have the perfect blend of melody and groove, and the playing is just spot on: Blade is probably one of my favorite drummers on
the scene (especially when playing with one of my heroes: Wayne Shorter).
Tigerskin - Any of his tracks/EP's
- This choice is totally left-ﬁeld, but as I've been currently working with a DJ on the scene in NYC at the moment (since Jan, 2012), dance music has been a big part of my life and ﬁltering into my work and music as of late. Tigerskin is a Berlin-based DJ on the local scene there and he tastefully blends Soul elements with the Deep House genre. Not everyone's cup of tea but if you enjoy dancing as much as I do, his stuff is excellent!

Aside from LOCUS, what do you have planned for the rest of 2013?

During the LOCUS tour, I'll be having a second EP release of some dance music I've produced with NYC-based DJ 'The WIG' under a Greek label called USessions Records, followed by another EP release with another label based in California, LTHM. Another trip to Berlin in the the Autumn looks like a possibility and then I have my third Human Equivalent album to release before the year's up. I'll be back to playing with some of the various jazz groups I frequent in around the city and starting new projects with some great players there: one I'm looking forward to is a Jazz-Folk-Fusion a Brooklyn-based pianist friend of mine is putting together. Otherwise, there's a handful of other projects in the works, as well as some visual arts creations I do with a fellow musician from our days at Berklee. All-in-all, as my DJ friend would say, just trying to "make it happen"!