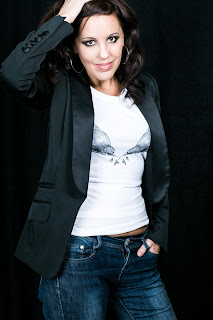 'Glory Days.. her best mix yet of hooky tunes and smart lyrics'. MOJO ★★★★

Jazz listeners may be familiar with Gillespie through her work with saxophonist Gilad Atzmon, who was also the producer of Glory Days. During this tour, she is joined by a band featuring pianist Kit Downes.

British singer-songwriter Sarah Gillespie’s first two albums won her critical acclaim for mixing folk, blues and jazz with vivid lyrical imagery. Her latest album Glory Days cements her reputation, not only as a starkly original songwriter, but also as a formidable musician.
Featuring eight original songs and one cover, the solo guitar tracks (Postcards to Outer Space, Oh Mary) mark her as a fiercely good guitarist and a Joni Mitchell for the new age. There is a sharp intelligence and wit at play, as she bestows her musical heritage (she is half American) of Delta blues, Cole Porter-esque wordplay and folk narrative onto visions of the modern world where church bells can be downloaded, wars watched on 24-hour news cycles and where relationships rely on the receptiveness of smart phones (Signal Failure).

Sarah will be performing at the Willowman Festival in North Yorkshire on June 23rd, and at the Junction in Goole on June 28th.