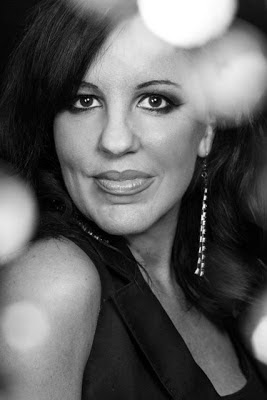 Sarah Gillespie is a singer-songwriter who has worked worldwide to critical acclaim. Perhaps best known to jazz listeners through her connection saxophonist Gilad Atzmon, Sarah is currently on the road promoting her new album Glory Days, which features pianist Kit Downes. As well as her work in music, Sarah also writes political papers and has an MA in Politics and Philosophy from Goldsmiths.

Tell me about the tour and the album, Glory Days?

Glory Days is my third album of original songs. It's produced by Gilad Atzmon and features Kit Downes on piano plus my long term rhythm section - Enzo Zirilli on drums and Ben Bastin on bass. The title track is a love letter to my late mother, a sort of euphoric roller-coaster ride through her life. It is a very cathartic record for me in that regard but it has a lot of cynicism and silliness in there too. The album as a whole veers a bit more towards folk and blues than its predecessors. There are 2 tracks on the record that are just me and my guitar but my quartet all add groove, joy and different colours to my songs. I 'm blessed to have such a high calibre of musicians working and touring with me.

Some listeners will know you through your connection to Gilad Atzmon - How did that come about and what's it like to work with Gilad?
I met Gilad years ago in Ronnie Scott's and our relationship was sparked by a mutual passion for politics and philosophy. I was studying my MA at the time and he kind of helped to steer me around a new intellectual corner. At the time I never imagined I'd join forces with him musically because I branded him as 'jazz' and myself as a 'singer songwriter' with the assumption that these musical categories were intransigents. As it turns out there is a lot of folk in Gilad and a dose of jazz in me. Some of our co-written tunes like 'Lucifer's Highchair' people assume that Gilad composed the strange timings in the verses and I composed the Celtic chords but its actually the other around! Working with Gilad has been an exhilarating learning curve. He has now produced all 3 of my studio albums plus my anti-war suite The War on Trevor. It's been incredible fun touring with him. His mind and creativity are a constant live wire tuned into some new, unfolding beauty - albeit intellectual, aesthetic or both. I told him the other day 'you've got more nature in you than London zoo' and he took that as a big compliment. He's a pretty unstoppable force!

Looking beyond this current tour, what are your musical plans for the rest of this year?

I'll be playing in the USA in October which I'm looking forward to immensely. I'll be in Santa Fe, DC and Seattle. Also, my album comes out in Italy in September so we'll be playing some dates there. In November it's the London Jazz Festival where I'll be perfomring with my quartet on November 23rd at Albany Theatre and I can't wait to join Gilad with Strings at the Southbank Centre on November 21st for a song we co-wrote, succinctly titled "Call Me Stupid, Ungrateful, Vicious and Insatiable". Meanwhile I'm just writing more music in lots of crazy tunings on my guitar.

What can people expect from a Sarah Gillespie gig?

A mix of jazz, folk and blues and lots of mucking about...

Tell me about a musician you are excited about.

When we're on the road my band take turns to play desert island discs on our ipods. Ben got me massively into Chris Thile, a virtuoso American mandolin player. He's so organic, he mixes elements of bluegrass with jazz, then you hear him playing baroque stuff - he doesn't give a shit about genres, just great music. Here he is with Brad Mehldau playing Dylan's 'Don't Think Twice'