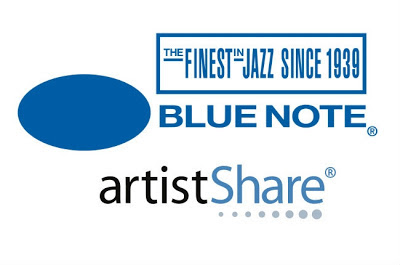 The new partnership, led by Artistshare founder Brian Carmelio, Blue Note chairman emeritus Bruce Lundvall and Don Was, Blue Note's president has been described as developing a "low-risk development arm of the label."

In essence, Blue Note will help select musicians and groups, and assist in the promotional aspects of record releases, while the crowd-funding element of Artistshare will be retained.  The musicians themselves will be still be owners of the recorded material.

This new partnership reflects the changing world of the recording and distribution of music. Artistshare has an impressive track record and has connections with world-class musicians and composers. One of their biggest successes, Maria Schneider, has won a number of awards for the music she has released through Artistshare.

Blue Note have stated that the focus of this partnership will be on finding up and coming artists and providing support to them, a focus which Blue Note has retained throughout their history.
Posted by Editor at 08:51