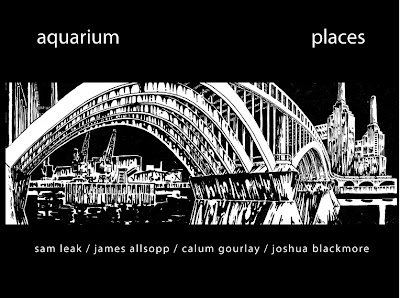 
‘Places’ is the second album by Sam Leak’s all-star London-based group, ‘The Aquarium’. Featuring the precociously talented young line-up of James Allsopp (tenor saxophone/bass clarinet), Calum Gourlay (double bass) and Joshua Blackmore (drums) as well as Leak (piano/composition), ‘Places’ is a strong follow up to their eponymous album released in 2009.
The mood of the album is for the most part reflective. Leak’s elegant, concise compositions are engaging and manage to be melancholic without becoming overly sentimental. The music avoids any jazz clichés and feels distinctively British, but in no way alienates itself from the jazz tradition.

The opening track ‘Places’ has a delicate theme, perhaps hinting at classical music, which is expressed beautifully by Allsopp before his gorgeous tenor solo. His playing is deeply melodic and as the solo progresses he improvises with extremely long lines which really takes the listener on a journey through the piece. This is followed by a daringly rhythmic solo from Leak with fantastic support from his rhythm section. Particular praise to Blackmore who shows on this tune, and in fact the whole album, how creative and exciting  a musician he is without ever feeling intrusive or egotistic.
‘Milan’ is another stand-out track, reminiscent of the softer side of Coltrane’s quartet or Charles Lloyd’s current group. It has a moody, expansive feel with a long rubato melody played by Allsopp and Leak over a continuous rumble from Gourlay and Blackmore, ebbing and flowing with the contours of the melody, and building to a crescendo as Allsopp reaches high end of his tenor before the band falls away leaving their leader to take a beautifully measured solo.

The melody of ‘Scribbles and Scrawls’ is jaunty, humorous and distinctively British, leading to tour-de-force piano trio improvisation, showing some very fast-fingered work from Leak and engagingly interactive playing from the whole ensemble.

The foreboding theme of  ‘February’ shows a darker side to the ensemble. The slow, dark melody and ominous bass playing of Gourlay is offset by some quicksilver brushwork from Blackmore before Allsopp enters on bass clarinet, his rich and sombre tone complimenting Leaks composition perfectly.

Leak’s fantastic group present an album that is both varied and cohesive, with a great, identifiable ensemble sound. Moments of real fire and brimstone are lacking (fans of British jazz in the Led Bib or Troyka mould will be disappointed) but this is beautiful, intelligent music expertly executed. Highly recommended.