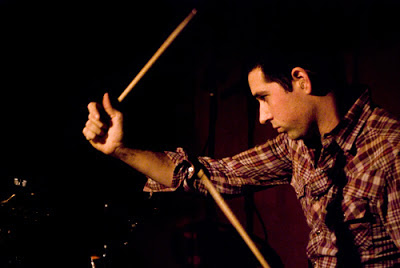 Still in his twenties, Mark Guiliana has earned critical acclaim internationally as a drummer, a band-leader and sideman. His work with Avishai Cohen Trio took him around the world, and he has also recorded and performed with Branford Marsalis, Bobby McFerrin and James Williams. Through his work as the leader of New York-based trio HEERNT, Mark has made a lasting impression on musicians and listeners alike. Bill Bruford described HEERNT's album Locked In A Basement as "Quite the most brilliant record you're going to hear for the foreseeable future‚ so I recommend immediate purchase. For drummers‚ its simply compulsory"

Mark is currently touring Europe with Mehliana, a duo with pianist Brad Mehldau, and on March 13th, they will be performing at Howard Assembly Room in Leeds.

The first time Brad and I played in this electronic setting was 2008. We continued to get together as often as our schedules allowed, but we didn't manage to play our first gig together until 2011. This project is different than anything else I do because all of the material is completely improvised. Brad is an incredible improviser and it's a humble and inspiring challenge to be in the moment and create from nothing every time we play.

Does your approach to playing differ depending on the size and line-up of a group - do you feel that your role changes?

My approach is unique to each musical situation I find myself in, but my intention never changes. I do my best to serve and support the music from the ground up, focusing primarily or groove, dynamics, balance and shape. It is also very important to me to make the other musicians as comfortable as possible so that they can express themselves with the utmost musicality and confidence.
Aside from Mehliana, what else does 2013 hold in store?
My band, Beat Music, has it's debut album coming out in April. We'll be playing in and around New York throughout the year to support the release. Aside from this March tour with Brad, we have plans to be on the road in both October and November as well. I also have lots of shows coming up with the great singer Gretchen Parlato, both in the US and in Europe. I'm certainly grateful for all the opportunities I have - both musically and otherwise.

And finally, what about the music you're listening to at the moment - do you have a favourite artist or album at the moment?
I'm constantly trying to explore new music but I always seem to fall back on a handful of classics. The record that I listen to more than any other is 'Bob Marley & The Wailers - Live at the Roxy'.