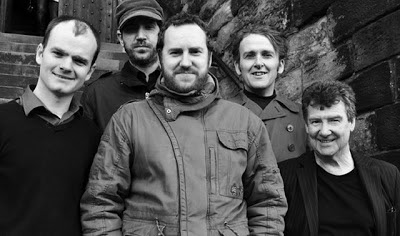 
Bassist, composer and band-leader Andy Champion is one of the leading figures in the North-East jazz scene, and his reputation and performing experience have led to national and international recognition. He is a prime example of a professional jazz musician today - as well as being sought after as a player in a range of different contexts (big bands like Voice of The North, duos with vocalist wife Zoe Gilby, improv. collaborations with Chris Sharkey and of course his own band, ACV), he is also active as a teacher and as a promoter, running Splinter@The Bridge in Newcastle. Andy spoke to Jazz Yorkshire about ACV, music he's been listening to and his plans for 2013...


Your group, ACV, has been selected as one of the groups in the Northern Line scheme for Jazz North. Tell us about that group.

I formed ACV in 2009 initially just to rehearse a couple of ideas I'd been messing around with. When I first picked up the bass guitar as a kid I started writing my own tunes, but as I got older I found myself only playing other people's music. I suppose that's quite common for a lot of bass players but I figured it was time to get creative again. I didn't have a particular 'sound' in mind for the band at first, I just knew who I wanted to work with - Graeme Wilson - saxes, Paul Edis - keyboards, Mark Williams - guitar and Adrian Tilbrook - drums. They're all fantastic musicians who are willing to play anything I throw at them.
The group's sound obviously draws from my influences, mainly contemporary jazz, prog rock and free improv, but the way the guys interpret the music puts a whole different spin on it. And although there's lots of odd time signatures going on, the music is not complex for the sake of being so. The emphasis is really on strong melodies and grooves.
What are your plans musically for 2013?

The new ACV album 'Busk' is coming out sometime in April and there'll be some gigs around the UK to support it, including the album launch at the Gateshead International Jazz Festival on April 6th.
Also at GIJF, I'll be performing Ian Carr's 'Northumbrian Sketches' with Henry Lowther, Tim Whitehead and the Northern Sinfonia Strings which I'm very excited about.
I recently recorded a new album with my wife, vocalist Zoe Gilby, which will be released later this year and at the other end of the spectrum there are plans to tour with an Anglo/French group called Sonsale which is funded by the Jazz Shuttle scheme.
As well as being a performer, you are also a promoter. What was behind your decision to get involved in that side of jazz?

That all came about by accident really. Paul Edis started a jazz night at a small venue in Newcastle a few years ago and I would occasionally play there and help out. Then there was a problem with the venue and I think Paul also became too busy with his PhD amongst other things so the whole thing just came to an end. Adrian Tilbrook and myself discussed the idea of doing something similar to keep the small scene that had developed going so we started 'Splinter' at The Bridge Hotel. It then became difficult for Adrian to make the 100 mile round trip every week so it was left to myself and Zoe to run. It started as somewhere for North East based musicians to play original music but we now feature a lot of touring bands from all over the UK. Sometimes it can be frustrating when the audience numbers are low but its always worth it for the quality of music we get.We're now coming into our fourth year and I'm still really enjoying it....surprisingly!
What sort of music are you listening to at the moment - do you have a current favourite artist or album?

I've been a huge fan of Kate Bush for years and I'm really into her latest album '50 Words for Snow'. She never fails to come up with something completely original.
In more of a "jazz" vein I've been listening to the new album by Corey Mwamba, Dave Kane & Joshua Blackmore - 'Don't Overthink It'. They're amazing musicians and I regard Corey as one of the most unique creators and instigators of original music on the British jazz scene today. And a thoroughly nice chap!
Other than that there's always a bit of John Zorn, Tim Berne, Albert Ayler, Mingus etc, Gentle Giant or some other 70's prog being played. And when the energy levels are low I'll whack on a bit of Slayer!
Aside from ACV, what else are you involved in?
I regularly write and gig with Zoe Gilby and her quartet and we also have a voice/bass duo which seems to go down very well wherever we play, including a recent gig in front of 200 kids in a school in Finland!
I'm also involved in a new all acoustic improvising group called 'Batteries' which features Chris Sharkey, Corey Mwamba and Mark Sanders and I'm hoping we'll do a lot more with that. And for something completely different I play electric bass for Soul/Funk group Smoove & Turrell who are in the process of writing and recording their third album. I like to try and keep it varied.
Where can we hear you next?

I'll be playing with the Graeme Wilson Quartet at the Cluny in Newcastle on Feb 26th.
There's also a few dates with Smoove & Turrell coming up over the next couple of months and then out on the road with ACV throughout April. You can check those dates at www.acvband.co.uk