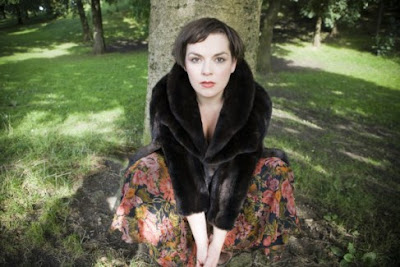 Scotland-born RAM graduate Jude Williams is a triple threat. An actress, singer and dancer, you may have seen her in theatre productions like Cathy Boyd's Orlando, on screen in programmes like Taggart, High Times and C4's Forgetful Green or on-stage at the Glasgow Jazz Festival and venues across Scotland.
In February, Jude will be visiting Yorkshire as part of her Apollo Jazz Network tour to perform alongside Leeds-based musicians Declan Forde, Riley Stone-Lonergan, Steve Hanley, Tom Riviere and Kim Macari. Jazz Yorkshire spoke to Jude about the tour, music and her career.

How did the Apollo Jazz Network tour come about?

Kim and I were involved in a 13 hour Improvised performance piece - The Darktown Cakewalk: Celebrated from the House of Fame. We got to know each other and often talked about music. The seed was planted and when I announced pre Christmas that I was committing more time to singing, Kim swooped in to make it so!

What does 2013 hold in store for you - what other projects are you involved in?

It's shaping up to be a beautifully varied and challenging year. As a singer, actress and theatre maker I've a bunch of stuff on the go. Singing wise I have gigs set up in duo form with: Euan Stevenson [Piano], Nigel Clark [Guitar] and Harry Hussey [Accordion] - and I plan to make some recordings along the way. Theatre wise: I am developing a piece of theatre for Imaginate called Grandad and Me and making Tramway, Glasgow first Winter Show based on the story of The Red Shoes - where I'll be acting, singing and dancing. And I am beginning an improvised collaboration with Leo Forde [Guitarist]. Whose mum - Kathy - I was in a theatre workshop with the other day and whose brother I'll be gigging with soon.


What music are you listening to at the moment - do you have a current favourite album or artist?

I'm a little bit in love with Rick Redbeard's "Now We're Dancing" which I got a hold of at a Shh... festival in Glasgow last month. And  Blossom Dearie's version of Once Upon a Summertime (La Valse Des Lilas) by Mercer-Barclay-Legrand - who wrote the very brilliant You Must Believe in Spring. And I can't deny my love of Sondheim - I trained in Musical Theatre at the RAM in London and love his lyrics - the Follies is currently out of it's wrapper. He was mentored by Hammerstein - another brilliant writer. I guess it's the actress in me that relishes the narrative of the songs, the world needs stories and there is something about piecing together many mini monologues that I find deeply satisfying.

Who influences your work as a jazz singer?

Nina Simone's fierce vulnerability. I love Blossom Dearie's delicacy and precision. And I had some great teachers at the RAM, London. George [Hall] and Andrew [Freisner] in particular instilled a great respect for melodic line: trusting the swell, variation and detail. We'd often learn melody with lyrics and vice versa to allow each to stand alone. You find things that you uncover things you might not notice were you to plunge direct into the combination of the two.
I also play with the audience influence as much as I am able. A performance mentor of mine has been key in opening that possibility and the freedom of form that that brings - I am not singing the version of "When Sunny Gets Blue" that I might sing in the shower, I am singing the version that the room, the day, the people, the other musicians are calling for. Ideally the moment is ours not mine or yours but the place in between, I want to hear the songs for the first time too! Let them live as they are that day. The season/weather influences me too - no doubt - I played with Harry Hussey [Glasgow Jazz Festival] alongside Dick Lee, Camerone Maxwell and Paul Tracey. No doubt I was more bombastic and giddy due to the summer sun and with Nigel on a cold, wet winters night in December - well the world called for something different.