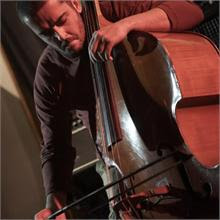 Bassist and composer Dave Kane has had a busy year working in the UK and overseas with musicians including Hamid Drake, Corey Mwamba and Alex Bonney. The internationally recognised Kane talks to Jazz Yorkshire about his upcoming gig at FUSEBOX (debuting the Rabbit Project Orchestra), his highlights of 2012 and the music he's listening to...

You are appearing at the Fox and Newt on Friday 21st December - tell us about the band you're be playing with.

It is going to be an extended version of the Rabbit Project. At the minute it is a 10piece band (and may be even bigger by the time of the gig) - me on bass & direction, Joost Hendricks on drums, Chris Sharkey on guitar, Johnny Richards on keys (depping for Matthew Bourne), Si Kaylor, Oliver Dover & Tom Challenger, playing various saxes/clarinets, Bobby Beddoe on trumpet and Semay Wu on cello. And I am currently looking for a violinist for the gig! There will be some of my music that a lot of people haven't heard before & some older compositions that some people may have heard before. I am possibly doing a couple of pieces that I used to do with the LIMA orchestra back in the day! I'm really excited about working with this particular line up... As I think you will agree, it is an extraordinary band.

What have been the musical highlights of your 2012?

Well, 2012 has been a really diverse year of music making for me. And I've been very fortunate to do a lot of traveling and gigging this year, with many different projects. But, one of my personal highlights has to be being on the road with Hamid Drake. He is a master musician/drummer and one of the most in demand jazz drummers in the world. He has played and recorded with loads of the greats - Don Cherry, Archie Shepp, John Zorn, Peter Brotzman, William Parker, David Murray, etc. The list is endless! So it is a real privilege to share the stage with someone who has such a huge wealth of knowledge about music and life. Hamid is one of the most generous and giving people I have ever met and I've learned a lot from him.   I've also just finished a 10th year anniversary tour with Bourne/Davis/Kane and we've just finished recording our 3rd album. This is such a special group and the way we make music together seriously has some deep, cosmic connections. I'm so lucky to play with those two heads!

What have you been listening to recently - do you have a current favourite artist or album?

Aside from my stable diet of my favourite artists that I always come back to; Frank Zappa, Charles Mingus, John Zorn, Igor Stravinsky, Tom Waits, Arvo Part.  I've been really digging Lianne la Havas' music. She is an amazing young singer songwriter based in London, nominated for a Mercury prize this year.  I'm also listening to lots of Fela Kuti, J-Dilla, Nas, Efterklang, Michachu and the shapes, David Byrne. On the jazz front; Laura Jurd's debut record is really incredible, & James Allsopp's new "Golden Age of Steam" record is outstanding too!

Tell us a bit about the projects are you involved in at the moment?

I have just finished recording our 3rd album with Bourne/Davis/Kane.  I've also just finished a live recording with Corey Mwamba & Joshua Blackmore. I've been busy-ish this year with COLLIDER (me, Chris Sharkey, Matthew Bourne, Chris Bussey) which is a totally improvised group, in which I play electric bass. Full on music, coming from more of a rock and punk ethos. We did a session at pinewood studios for BBC's jazz on 3 this summer, and Russell Crowe was filming his latest film Les Miserables in the studio next to us - they had to stop filming because our music was SO loud that it was being picked up in their audio! I also play in a hip hop/jazz band called ISWHAT, which does a lot of gigs in Europe. I'll be back out on the road with them in March and April in Europe 2013.   I have a duo with trumpeter Alex Bonney which is also releasing a recording in the not too distant future.  And of course I am working on a new record for the Rabbit Project or Rabbit Project Orchestra or the ever expanding line up that it is at the minute! I think the new album will be written for octet though.

What do you like best about the Yorkshire Jazz scene - what defines it?

The Yorkshire 'Jazz' scene that I'm involved with is very vibrant and forward thinking, and has a really great energy. And definitely has an ethos of DIY about it. It all spawned from us not being able to get gigs in the venues that wanted to put on what they thought was jazz, (i.e, people in suits playing standards and the like). We formed LIMA (Leeds Improvised Music Association), and just started promoting our own gigs. With the only pre-requisite being that the music being made had to either be totally improvised or original compositions. It all grew from there really.  I don't really know that much about the straight ahead jazz scene in Yorkshire. I've never really had any interest in making that type of music.
Posted by Editor at 06:13